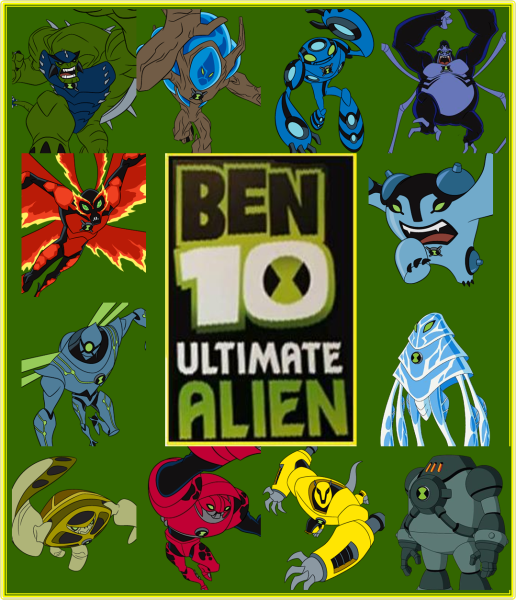 It’s very unlikely that anyone who has paid attention to cartoons has been able to avoid the Ben 10 series for the last five-six years.  Although this review is specifically about the latest iteration of this series, it’s kind of impossible to ignore the first two: Ben 10 and Ben 10: Alien Force.  My six year old has been hooked on this show since the first version (and we’ve got the boxes of toys labeled Ben 10 to prove it), but I have too, especially now that the show has an older and darker edge to it with Ultimate Alien.

The voice cast on this show is both diverse and amazing.  The different alien transformations of Ben Tennyson (the title character) all have a different voice to match the alien, allowing the show to tap into such awesome voice talents as Dee Bradley Baker, John DiMaggio, Jeff Bennett and more (and only need them for the episodes in which those aliens appear).  The main three characters are consistent across Alien Force and Ultimate Alien: Yuri Lowenthal (Ben), Ashley Johnson (Gwen Tennyson, his cousin), and Greg Cipes (Kevin Levin, their ‘friend’).  All three are very well done. 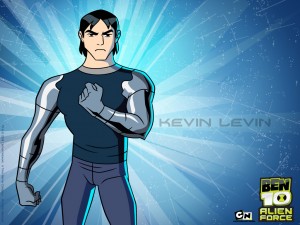 No, that's not Jax from Mortal Kombat or Cyborg from Teen Titans. Kevin can absorb the substance of materials and convert his body into it.

For those who have missed the previous two Ben 10 shows, the general premise of the show is simple: aliens are out there, some kids on Earth are offspring of human/alien parents or grandparents, Ben Tennyson (one of these kids) finds a watch imbued with the DNA of all of the alien races in the universe (which he can use to transform into said aliens) and fights to protect the universe.  The original series was very campy and silly, with Ben and Gwen only being 10 years old.  Beginning with Alien Force and leading into Ultimate Alien, the show gets much more series with the characters aged to their middle teens.  This is where the series really gets its wings.

With the second series, Kevin Levin gets inserted into the show as a reluctant member of the hero team and adds a whole new level of awesome to the series.  A shady, black-market salesman who joins up with the team initially just on “common enemies” pretenses, Kevin is by far the most complex character on the show (and, as I said last week in the Iron Man: Armored Adventures review, I like my anti-heroes).  As Ultimate Alien progresses, we learn deeper levels of Kevin’s motivations and realize finally why he really wanted to befriend Ben and Gwen (and only part of that has to do with the unspoken attraction between Gwen and Kevin).  Kevin Levin, to me, is worth the price of admission alone and everything else is just gravy.

If you didn’t like Ben 10, make sure you give Alien Force and Ultimate Alien a watch anyway.  The latter two shows are much more similar in animation, darker themes, and stronger plots.  While I initially was annoyed with the most recent variant of the show with the “Ultimate” concepts of older alien forms (“I’m just gonna have to buy new versions of the same toys now!” I cried), I was happy to see the writers continue to explore the deeper levels of plots left dangling in the past series’ and close up loose ends while adding new layers. 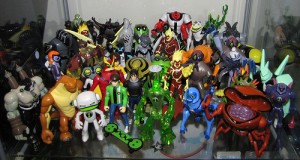 This is just a small sample of the toys. And only from Ben 10 and Alien Force. Yeah, money sink FTW.

With constant usage of old villains (alien overlord Vilgax, the medieval techno-fiends The Forever Knights, crazed geneticist Doctor Animo, voodoo magic users Hex & Charmcaster) and new (the biochemical Hive and Osmosian Aggregor), the show never has a shortage of bad guys to throw at the heroes (sometimes in combinations/teamwork efforts, for extra fun).  The villains, in many cases, are more interesting and complex than the good guys (except Kevin).

Man of Action has created such an awesomely robust comic book/sci-fi style world in Ben 10.  In some ways, I want Man of Action to do more shows (loving this series and Generator Rex), but in others I don’t want them to dilute the quality of the two shows they produce.  I’m glad Ben 10 is already signed on for a fourth series when Ultimate Alien ends.  While the original Ben 10 had the feel of a ‘test-the-waters/marketability’ kind of show, they really hit their stride since, tell phenomenal stories, and have created some memorable characters.  I don’t care if they keep making me buy more toys and video games for my six year old, because I enjoy them as much as he does.  Ultimate Alien is most definitely a 5/5 Giant Cartoon Mallet kind of show!