Having offered an Uber driver $200, I now understand the mom from Home Alone better (an AwesomeCon Story). 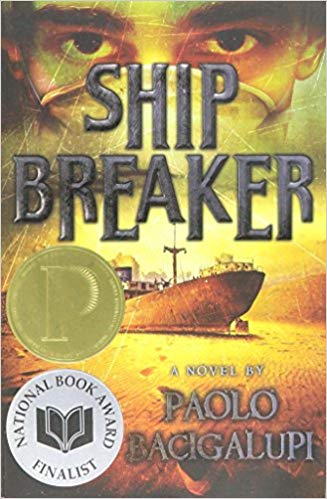 This thrilling bestseller and National Book Award Finalist is a gritty, high-stakes adventure of a teenage boy faced with conflicting loyalties, set in a dark future America devastated by the forces of climate change.

In America’s flooded Gulf Coast region, oil is scarce, but loyalty is scarcer. Grounded oil tankers are being broken down for parts by crews of young people. Nailer, a teenage boy, works the light crew, scavenging for copper wiring just to make quota–and hopefully live to see another day. But when, by luck or by chance, he discovers an exquisite clipper ship beached during a recent hurricane, Nailer faces the most important decision of his life: Strip the ship for all it’s worth or rescue its lone survivor, a beautiful and wealthy girl who could lead him to a better life….

When my son first read this book for summer reading before seventh grade, he wouldn’t stop talking about how much he enjoyed it. It took me a year, but I finally got around to it and I’m sad that I took so long for me to get there. Bacigalupi created an amazing dystopian society focused on the rising sea levels predicted by climate change experts. It’s one thing to create a post-apocalyptic world, but amazing authors create fantastic depth, focusing on things like society structure, economy, and other facets of “what will life be like after impending catastrophe”.

As usual, what really makes dystopian stories great are the characters. Whether it’s zombies or nuclear fallout or rising water levels, how people respond is what matters. In this world, at least Nailer’s portion world, it’s cut-throat and you’re only as valuable as what you can provide. There is a certain Lord of the Flies element to the relative freedom the children have (with scenes of them drinking, being violent, and acting way more adult-like than a teenager would in our world), but it isn’t without reason. It’s a hard world and hard world create hard people.

Nailer’s character progression and his inherent drive to do the “right” thing to him (which isn’t exactly in line with the “right” thing by his peers’ standpoint) is what separates him from the rest of the characters. He represents a kind of impractical humanity/compassion that has been lost to this world in lieu of survivalism. As said above, any good dystopia is less about the events that led to the apocalyptic scenario and more about how people respond. This story is no different and it’s wonderful.

As mentioned above, there are scenes with teens cursing and drinking. There is also some somewhat descriptive violence (as well as a certain disregard for other humans) that, while they make complete sense in the world Bacigalupi created, is still a bit dark and cold. Again, this is a dark and cold world. My son was assigned this book in 7th grade so he was just turning 12 when he read it. I think this is a great age range, so long as the content is examined through a comparative filter that the way the teens act in this world is not appropriate for our society. If anything, this would be a more appropriate educational book to examine some of these elements than the tried and true Lord of the Flies, because at least Ship Breaker shows humanity in a cold world whereas Flies shows the inherent darkness in even “civilized” people.