Today we continue Super Hero Month on Toonopolis, The Blog and switch from a DC property to a Marvel property.  This week, I am going to review Iron Man: Armored Adventures. 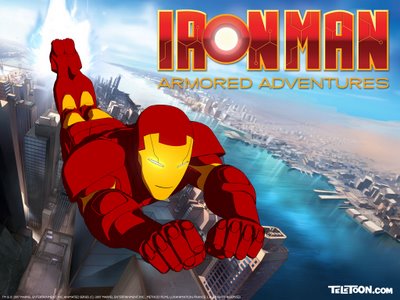 As I said last week with Young Justice, I am attempting to review these comic book cartoons this month without looking at them in the light of overall comic lore and continuity.  I also said that I have always been more of a Marvel than a DC, so incongruities with Marvel shows will generally jump out much more quickly to me.  Before I start twitching after watching the first half of the first season of this show, let me discuss the voice cast as I like to do.

The voice cast is not very good.  Adrian Petriw is decent as Tony Stark but the other two main characters have really flat delivery (Daniel Bacon as Rhodey and Anna Cummer as Pepper).  In fact, one of the few voices that stood out as I tried to watch this show was the voice of Mr. Fix.  I really want Donny James Lucas to do some more voice roles, because he’s fantastic.  The rest of the voice cast is pretty neutral at best.

Concept Art. Should have stayed a concept...

That being said, the best part of the show is the theme song done by indie rock band Rooney.  It pretty much goes downhill from there.  The concept of the show is that Tony Stark is a teenager and is thrown into his Iron Man alter-ego after his parents are killed suspiciously.  His best friends Rhodey and Pepper are there and they work together as a teenage crime-fighting unit, only dealing with large-scale issues.  The problem with this concept is that they dropped the ages of the characters but kept the severity of the battles the same.  Typically the shows that work well with the turn-well-known-characters-into-kids theme also drop the importance of their struggles to match the teenage years.

As it is, we have Tony Stark worrying about memorizing lines to Hamlet while battling a villain who has been turned into pure energy from one of his dad’s inventions.  Further, Tony Stark is a major super-genius (as demonstrated very early in the show).  Why in the world would he have trouble memorizing lines for drama class?  The rest of the characters, with the exception of Rhodey, are pretty weak.  Pepper is an annoying chatterbox (a fact that is laid on way too thick).  Happy Hogan (the jock who is basically a weird unintelligent loner) just leaves me scratching my head.

I know I said I’d avoid comparing the series to comic lore and previous iterations of a character, but I do have one major issue with this show in comparison.  Tony Stark/Iron Man is perhaps one of the best anti-heroes in all of comics.  As someone who just wrote a whole novella about the origin of an anti-hero (Toonopolis Short: Anchihiiroo), one might say I have a respect for them.  Tony Stark is supposed to be completely egocentric, only working for the common good when it serves his interests also.  In this show, he becomes a boy hero akin to Peter Parker/Spider-Man (as one of my comic geek friends put it when I asked his opinion on the show).  If I wanted to watch a Spider-Man show, I’d watch Spider-Man… not Iron Man pretending to be Spider-Man.  In fact, while the show was running I often forgot I was watching Iron Man until he was in the suit. 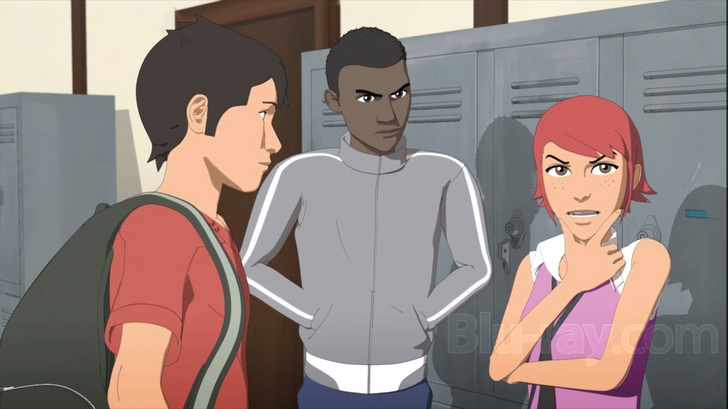 The animation is just so disjointed.

Lastly, the animation is not something I enjoy.  Several shows are starting to use this CGI cel-shading art style (Hot Wheels: Battle Force Five was another) but I’ve found that this animation style works much better for video games (the latest Dragon Quest games, Namco’s Tales series).  The animation of Iron Man: Armored Adventures is choppy and not very fluid.  That’s why I think this style of CG is better for gaming than for a cartoon.

Overall, as happy as I was with Young Justice last week, I am just as disappointed in Iron Man: Armored Adventures this week.  Shows like this are the reason I’ve been avoiding comic book properties over the last few years.  It’s a money-grab trying to capitalize on the success of the Iron Man live action films by slapping the Iron Man name on something that doesn’t even encompass the spirit of the original property.  2/5 Giant Cartoon Mallets.  This came pretty close to being my first 1/5, but as I said before, that is reserved for something that is completely unwatchable, not just mostly.