After bombing last week while trying to review a Pre-K cartoon, it’s back to the grind of real shows here on Toonopolis, The Blog.  Getting back to Cartoon Network, today’s Saturday Morning Cartoon Review is going to be Cartoon Network’s Generator Rex! 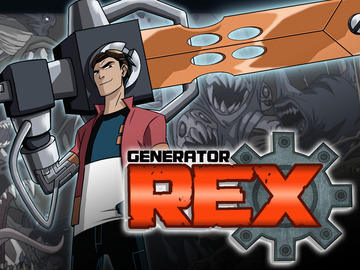 I remember getting very excited for Generator Rex when my son and I first started seeing the commercials for it (show debuted April, 2010).  We very easily saw the link to Man of Action’s other series, Ben 10.  The animation had some carry-overs but Rex came across as much grittier.  As a show that takes place in a dystopian future, obviously it was bound to be much darker than a lot of the other Cartoon Network shows.

The title character, Rex Salazar, is voiced by talented former child star Daryl Sabara (well-known as the brother from the Spy Kids movies).  It is nice to see him put his skills to use in a voice acting role during that awkward I-was-a-child-star-but-not-quite-an-adult-yet-either phase of his career (he is currently 19).  Agent Six, the Matrix-inspired special agent, is voiced by long-time soap actor Wally Kurth.  I surely hope that Kurth sees this avenue through for more voice roles because he is great.

They round out this cast with some phenomenal voice actors predominantly known for voicing in anime and video games: Troy Baker as Van Kleiss (the main baddie) and Grey DeLisle as Dr. Rebecca Holiday (head scientist for the Providence agency).  Lastly, throw in John DiMaggio as the chimp sidekick (because why not?), Fred Savage [YEAH!] as Rex’s friend Noah, and JK Simmons as White Knight (the leader of Providence).

The show itself is very dark and gritty, as I said.  But when the world was hit by a catastrophic explosion causing the majority of the world’s population to become infected with nanites (micro-technological particles that alter the DNA of the infected) and mutated EVOs are rampaging throughout the world, well, you might expect a little darkness to happen.  Rex is a teenager infected with nanites but inexplicably is not a rampaging, mutated beast.  What he can do, though, is control the nanites and shape parts of his body into awesome mechanical weapons (like giant fists, jet packs, stomping boots, etc.).  He’d love to tell you why he’s different, but he has… AMNESIA!

(Hey, good thing Agent Six is voiced by a soap actor, I bet he knows all about amnesia.)

While a western animation, Generator Rex, is very story-driven (more like anime).  You need to watch the show from the beginning.  If you are a fan of dystopian fiction, this will be right up your alley.  Rex drops in some of the silliness because of the way he acts and fights but Bobo, his talking chimp friend, serves as the comic relief regularly.  Make no mistakes, though, this show is not really designed to keep you laughing.  It is not overtly violent as Rex defeats his EVO enemies by sucking out the nanites, reverting them back to human, instead of killing them, which makes it acceptable for more ages than more violent animes and shows.

Overall, the story is very compelling as we learn more about Rex’s past and why he is different.  The show does get a little sciencey and technologically at times with explaining the circumstances that led up to the explosion that caused this dystopian world.  The primary villain, Van Kleiss (an EVO who, like Rex, has not gone mad from the infection), serves as a catalyst for a lot of the plot, battles, and intrigue into Rex’s past and what makes him special.

I love the show.  I would watch it more but, regrettably, the story is a little dark for my six year old (who has an active imagination and doesn’t need more monsters to keep him from sleeping properly).  We watched the first few episodes together but the monstrous EVOs were too scary for him.  This is definitely a show more designed for the 10+ crowd and for them it is fantastic.  I look forward to the story as it progresses and highly recommend it, especially for fans of dystopian sci-fi that is grounded (somewhat) in believability.  I give Generator Rex 4/5 giant cartoon mallets.