And now for something completely different…

For the first time in my Saturday Morning Cartoon Reviews, I will be reviewing a show targeted for a younger audience than my normal stuff.  It will likely not be the last one.  While my six year old son is too old for Pre-K oriented shows, my younger son is about fifteen months and starting to show an interest in the moving picture box.  The American Academy of Pediatrics recommends zero television for children under two.  However, how many of them have to figure out a way to steal 15 minutes to actually fold a few baskets of laundry without a kid climbing inside the basket?  So, shut up.

Today: I will review Jake and the Never Land Pirates, a new Disney Junior original show including one of the best literary baddies of all time, Captain James T. Hook. 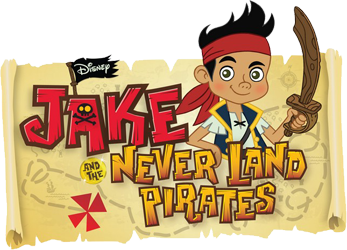 Just from looking at the animation, it is clear to see it is the cousin of such other Disney shows as Little Einsteins, Handy Manny, and Mickey Mouse Clubhouse.  I’ve been able to avoid these shows for the last couple of years as my older son has a bit of an older taste when it comes to shows (I blame the parents).  The animation is pretty and very well done, suffice to say.

Just because this is a pre-K show, there’s no reason to ignore my normal formula.  Let’s analyze the voice cast first.  Okay, let’s ignore the first couple of people (the three main kids who are the main characters) and get to who people actually care about first: Captain Hook and Smee.  Hook is voiced by the awesome Corey Burton, who has been around the business for 30 years.  He played Hook in Return to Neverland and does a wonderful job emulating Hans Conried.  Jeff Bennet, whose credits are insanely wonderful, plays Smee.  Well played, Disney.  They round out the main cast with some talented young actors: Madison Pettis (Izzy), Jonathan Morgan Heit (Cubby), and Colin Ford (the titular Jake).

With added regular voices by David Arquette (the parrot Skully), singer Lisa Loeb (the other parrot Winger), and Tori Spelling (Pirate Princess), they’ve done a great job putting a strong cast together.  The two best additions were complete surprises as I was watching episodes of the show for this review.  Sharon Osbourne voices Mama Hook (who thought Hook had a mother… according to Peter Banning’s daughter in Hook, he needed one) and the Wise Old Parrot is given life by Adam West (which is almost as instant-win as putting Patrick Warburton into your show).

The analysis of the show is pretty simple.  The show borrows a lot of the concepts that has worked fantastically for Pre-K shows since Blue’s Clues invented the genre.  Jake and his young pirates sing a lot and talk to the screen to encourage interaction on basic Pre-K skills like counting, letters, and simple call-and-answer skills.  Hook serves the same roles as Swiper from Dora the Explorer and the Bobos from Go, Diego, Go!  Smee usually joins the kids to help keep Hook happy.  The kids seek treasure (of some sort), Hook tries to steal it (or beat them to it), and gets foiled as the silly antagonist along the way.  The episodes work, are well done, and Never Land Pirates is a great Pre-K show.

However, as a huge Peter Pan fan who has more than once watched a marathon of Peter Pan (1953), Return to Neverland, Hook, Peter Pan (2003), and Finding Neverland, I must protest.  I understand that Disney wants to capitalize on the idea that kids want to be pirates, but children in Neverland are Lost Boys, not pirates.  Only adults are pirates.  I can accept Hook being a little bumbling (the antagonist in these shows needs to be) but it’s hard to accept child pirates in Neverland.  It’s borderline blasphemus.

That slight aside, I really like Jake and the Never Land Pirates and will definitely gravitate my younger son to this show over some of the other Pre-K fare out there such as Dora and Diego.  They cover the same content but pirates are much cooler than explorers and animal rescuers.  I’ll give it 4/5 Giant Cartoon Mallets.  I may have gone the full 5 had the three kids been Lost Boys instead of pirates.