This week’s Old School Wednesday Cartoon Review, the first on Toonopolis, The Blog is from John I.

John is a software developer, home brewer, amateur photographer, avid griller, runner, reader, writer and zombie enthusiast. He’s also a staff writer at comicbooked.com, maintains his own blog at ramblingjohn.com and can be found on Twitter @JohnI73.

Several months ago, while browsing the aisles of the video section of a book store I came across an 80s cartoon that I hadn’t thought of in years.  Before me was a box set of the entire Dungeons & Dragons series.  Although I couldn’t remember any individual episodes clearly, I had the opening practically memorized and stowed in the remote recesses of long term memory. It came back instantly.

Bobby declares “Hey! Look! A Dungeons and Dragons ride!” and the kids jump in a roller coaster car and enter a tunnel filled with dragons and other creatures.  Things suddenly take a turn for the worst in a Willy Wonka-esque swirl of color and light and the kids find themselves dropped into another realm. A baby unicorn runs toward Bobby and jumps in his arms as it flees from Venger. Dungeon Master, white-haired, balding and squat, looks on from the sidelines as he grants each character a role and a magical weapon: “Fear not. Ranger, barbarian, magician, thief, cavalier and acrobat.”

Even the packaging is a throwback to the 80s.  The red box and lettering mirror that of the original basic Dungeons & Dragons rulebook.  In a fit of nostalgia, I went to the checkout desk and planned on spending several evenings over the next month reliving a slice of my adolescence.

The first episode aired Sept. 17, 1983. I was ten years old and had recently been introduced to the world of Dungeons and Dragons.  Earlier that summer, I saw Krull. It was a horrible mess of a movie, but I didn’t care.  It had swords, magic and monsters and I ate it up.  I was primed and ready for more sword-swinging, monster-bashing action.

The story focuses on the journey of six main characters and their mascot.  Each is granted a magical weapon suited to their personality and skill.  Hank, the gold-haired leader of the group and ranger, is bestowed a bow that shoots energy bolts.  Bobby the barbarian, a nine year old boy at the start of the story, is quick to rush to the attack and gets a club.  Presto, who likes to perform card tricks in school back in the real world, is given a magical hat from which he attempts to produce just the right item to get them out of a jam.  Sheila, the thief, is Bobby’s older sister and cares deeply for his safety. 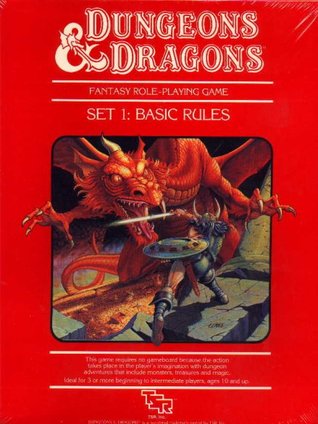 Dungeon Master gives her a cloak of invisibility (long before Harry Potter was a household name) which she often uses to get the rest of the party out of trouble.  Eric, the cavalier, is an ironic buffoon and a character easy to despise in the first season.  Growing up privileged has spoiled him and turned him into an acerbic loud-mouth who’s quick to run from a fight.  His shield matches his personality in that it will rebound an attack right back at the assailant.   Diana, the acrobat, is an award-winning gymnast in high school and puts her skills on display with a magical staff she uses routinely to vault over obstacles and enemies.  Rounding out the group is Uni, a not so creatively named baby unicorn, adopted by Bobby and cared for by the rest of the group.

The episodes in the first season and a half follow the same format.  The children are trying to find a way back home through the amusement park ride from which they came.  Dungeon Master, taking clues from Yoda, guides them along with cryptic phrases that are the key to resolving each episode and finding the way home.

“In darkness look into the light.”

“The fate of one is shared by all.”

“Through defeat you will find victory.”

Invariably, they’re thwarted by Venger.  He looks like a cross between a vampire and a Hellraiser Cenobite.  He wants their weapons for his own evil designs and keeps them from home.

The backdrop is filled with creatures drawn from the D&D monster manuals including lizard men, a beholder and orcs, of course.   The documentary makes clear that the D&D rules were not regard as canon, but rather inspiration.  Die-hard D&D fans might expect Presto to have a set of memorized spells.  Instead, he makes up some rhyming incantation on pulls something random out of his hat that can result is disaster or unexpected usefulness.  In one episode he pulls a Frisbee, regards it as useless, and tosses it away only to have it lodge in the gears of a bad guy’s mill leading to a grinding halt and collapse of a dam.

Dungeons & Dragon’s animation is a product of the 80s and has to be taken in context.  It has a flat, unshaded feel common to that era.  Mouths will move while the rest of the image remains stationary.  Some animation sequences are reused to simulate motion.  Annoying animal companions were commonplace.  He-Man had his tiger.  The Thundercats had Snarf.  And Dungeons & Dragons had Uni.  The half-bleating, half talking chatter can get under your skin. 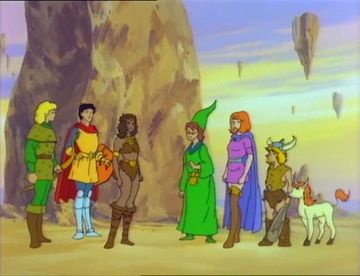 The predictable format is followed until the second season episode, The Dragon’s Graveyard.  It opens with Venger, once more, blocking the way home.  They face a moment of frustration and despair.  For the first time we see Bobby as a real little boy lost.  He breaks down and cries.  When Dungeon Master arrives to set them on another path Hank refuses.  He wants to take the fight to Venger.  Even cowardly Eric backs him up.  This turned out to be the creators’ favorite episode and features a commentary track.  It also happens to be my favorite.  The story breaks free of the mold and deals with their circumstances realistically.

There are quite a few extras inside including an Animated Series Handbook with a small D&D module and player sheets for each of the characters from the series. The first four discs have 27 episodes from all three seasons.  The fifth disc has a half hour documentary about the making of the show, storyboards, a Chose-You-Own Story style adventure, a live-action fan film (with surprisingly good special effects) and more.   The final episode, Requiem, where the kids finally arrive home was never aired. It is, however, included in the extras as an old-time radio drama.

Rumors abounded that it had been cancelled in reaction to religious and opposition groups casting Dungeons & Dragons as Satanic.  The truth is much simpler and disappointingly mundane.  It was cancelled due to poor ratings.  The intention was to end in a way that would allow the series to go in a different direction that targeted an older audience.

I may be a little biased, but I enjoyed the series then and I had fun watching it again.  For its time, the scripts were more sophisticated than many of its competitors.  You can character and story-line growth over the course of the three seasons it ran.  Too bad they didn’t do a fourth.