Luke Johnson knows a thing or two about cartoons. He also knows that many things about superheroes, and is a published author because of it. You can find his short story, “The Last Laugh” in the anthology Powers, available at Amazon.

Oh Sega, How Great You Were...

Ah, the 90’s. Say what you will about the decade (and God knows I do,) it was one of the best times for superhero cartoons. Many of the favorites came from traditional sources, such as X-Men and Spider-Man (Marvel) or the Batman, Superman and Batman Beyond animated series (DC). Another breakout star was The Tick, based on Ben Edlund’s comic series.

And then…there was Earthworm Jim.

Earthworm Jim started life as a video game character for the Sega Genesis in 1994. The platformer gained popularity thanks to its gameplay, art style, weird sense of humor, and its success translated into ports to other gaming systems, a few sequels, and an animated series on Kids WB. Which is convenient, since this is a blog about cartoons.

The story is nicely laid out in the theme song: Jim was a normal, everyday worm until a super suit fell on him. The suit gave him amazing strength and plenty of cool gadgets that came in handy when fighting evil, but also drew the attention of villains from across the universe.

Embedding is disabled, but it’s worth the click for the show’s intro!

Each show would follow a regular format: first, Jim and his sidekick, Peter Puppy (a small dog that would turn into an enormous snarling beast whenever hurt or scared) would find themselves at the mercy of one of the show’s villains. After a quick thwarting came the theme song, then the adventure would begin in earnest. ANOTHER villain would come forth to threaten our heroes/the universe/their neighbor’s eggbeater, leaving Jim and Peter in some kind of mortal peril. Just when things seemed darkest, Earthworm Jim would employ some form of cunning strategy–usually, screaming and wanton destruction–and the day would be saved. Then, a cow would fall from the sky–a fitting end to a 22-minute lesson in absurdity. 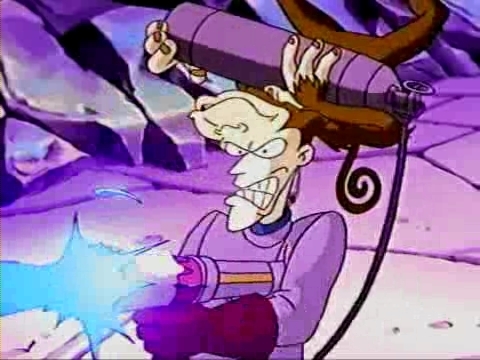 No, his name was not metaphorical. Professor-Monkey-For-A-Head was quite literal.

It should come as no surprise that the creator of the games, Doug TenNapel, also created the show. Many of the principal elements were taken from the game, but the show expanded them so much farther. The backdrops for Jim’s adventures become that much more bizarre when they’re given names like Terlawk, the Planet Heck, the Boulevard of Acute Discomfort, and La Planeta de Agua (Arriba!) The characters were given full personalities that, in many cases, were different from the game. Princess What’s-Her-Name became a tough rebel warrior, a far cry from her damsel-in-distress role in the games. Peter Puppy becomes a full-fledged sidekick, and also gains a flair for the dramatic. Bob the Killer Goldfish had a southern evangelist voice to go with his dreams of universal conquest. Professor Monkey-For-A-Head’s feud with our hero was only eclipsed by the adversarial relationship he shared with his skullmate, Monkey Professor-For-A-Head. They were fleshed out in a way that wasn’t possible in a video game in 1994.

The quality of writing cropped up in other ways, too. The jokes are many and varied, coming as physical humor, puns, running gags, pop culture references, and even the occasional not-for-kids joke. (“Whip me! Whip me!” “I beg your pardon?”) Dune fans might enjoy Peter Puppy’s take on the “litany against fear,” which he uses to keep himself from freaking out. Earthworm Jim’s train of thought is easily derailed, which leads to some classic moments, and his battle cries are fantastic (“Eat dirt, detestable nemesis of virtue! AAAAHAHAHAHAHA!”) And almost none of the principal characters can finish a simile. Expect a lot of “Prepare to (something) like a…um…” Not all the jokes hit, but most do, and there’s a lot of them. 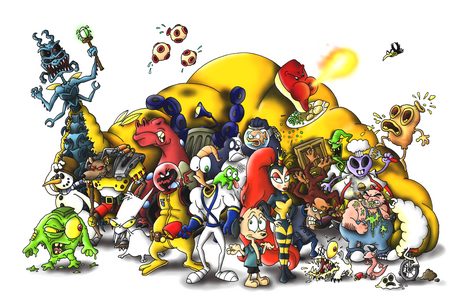 The characters may seem random but... no... wait, they're random.

Where the show really shines is in the talent of the voice actors. Most notable is the titular character, played to dim-witted, overzealous perfection by Dan Castelleneta. Yes, of Homer Simpson fame. The talent doesn’t stop there, though. Edward Hibbert, known far more for his theater work, lent his stage presence to Evil the Cat. Charlie Adler (Professor Monkey-For-A-Head), Kath Soucie (Princess What’s-Her-Name), and Jim Cummings (Psy-Crow; Bob the Killer Goldfish) have been in the voice acting game since the 80’s, and Jeff Bennett (Peter Puppy; Narrator) is one of the current top names in the business. John Kassir (Snott; Henchrat) was the friggin’ Cryptkeeper. Rounding out the cast is SCTV’s Andrea Martin, who plays Earthworm Jim’s biggest (in every sense) villain, Queen Pulsating Bloated Festering Sweaty Pus-Filled Malformed Slug-For-A-Butt. This was a cast with chops, and they each brought something special to the characters they played.

Unfortunately, even with all this going for it, Earthworm Jim only lasted two seasons. What went wrong? Most likely, it was too good at what it tried to do…absurdity tends to be a niche market. Fine for the video game industry, but not enough for network television (even a network like WB). Another possible flaw lies within that style, in that keeping a high level of quality is like walking a tightrope. Go too “safe,” and the show becomes stale–the writing centers on catchphrases instead of jokes, and characters become one-note. If you lean too far the other way, you risk losing your audience entirely. Did either of these happen with Earthworm Jim? Maybe not…but had it gone on longer, who knows. 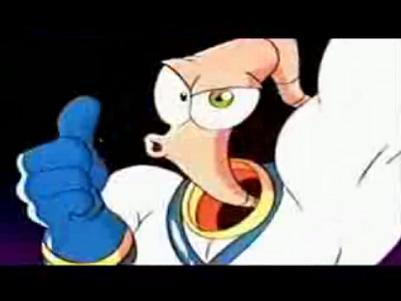 The history of the show after cancellation is…well, mostly nonexistent. It did inspire two more video games–Earthworm Jim 3D and Earthworm Jim: Menace 2 the Galaxy. Also, four two-episode sets were released on VHS. Apart from that, nothing. As far as I’ve seen, it was never picked up by any other channels (as opposed to The Tick, which gained a whole new popularity in reruns on Comedy Central.) No plans have been made to release the series on DVD in the United States. It seems like Earthworm Jim is destined to be a forgotten classic, remembered only by people who were lucky enough to see it while it was on.

But there may be hope yet: according to some anonymous, unverifiable source on Wikipedia, a full DVD set was released in Australia earlier this year. Perhaps there’s a chance we could someday watch the show in something other than grainy, taped-off-of-TV-fifteen-years-ago quality.

If that day comes, I plan on laying money down for it, and I hope you do too. After all, like the theme song says, “Jim can be a winner…if we only sing along.”