Ever Upward (The Excelsior Journey, #2) by George Sirois, Books for Boys Review 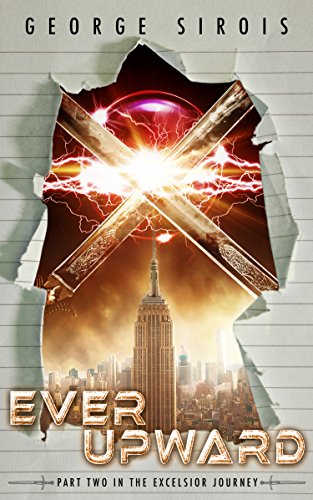 An ancient foe. A divided planet. An impossible choice to make.

A newly established link between Denab IV and Earth has endangered both planets, causing Excelsior’s own people to turn against him. With General Hodera ready to lead a deadly new army and an ancient foe awakened and more powerful than ever, everything both Matthew Peters and Excelsior love is on the brink of destruction.

Excelsior must return to Earth to undo the damage he has caused to his planet and his people, but doing so would sever the connection Matthew Peters still has with his loved ones.

A decision must be made, but time is running out.

The first review on this blog that is a sequel, but one I have been waiting years to read! I read Excelsior (book 1) shortly after release and absolutely loved it. I reviewed it on the blog last year here. I was really excited for the sequel because I really had no idea where the story was going to go next. While Sirois left plenty of backstory and such on the table, Excelsior had a very complete and satisfying ending.

What I feared most was the elevation of Matthew Peters to the demigod Excelsior and that he would immediately become the superman/undefeatable hero type. Sirois did an amazing job very early in this sequel of reminding us that he is still very flawed and still human enough to screw something up even with the best intentions. The fact that some of the main conflict in this story is directly *caused* by the hero really helps us continue to connect with Matthew/Excelsior as the protagonist. He isn’t unreachable or unrelatable and that is huge.

I was so happy to see more of the history of the alien world (including some of the etymology of not only the planet, Denab IV, but the Krunation race) and how intertwined Earth and Denab IV have been since events far preceding the backstory of even previous Excelsiors Valertus and Semminex. In the notes on the first book, Sirois talks about how expansive his planning has been for this series. When your “backstory” goes all the way back to the Big Bang and the creation of the universe, you know you’ve got some deep history!

Similarly to how Sirois kept us connected with Matthew’s humanity, he did the same thing with Earth. While the story taking place entirely on Denab IV would have been fine (we knew it was a Science Fiction with alien races), it was way more enjoyable for the dual stories taking place on both Earth and Denab IV. Diving into the history of Excelsior’s home planet and the truth behind the Krunation “god” was such a wonderful experience. With more focus on Krunation point of view characters, the reader is more able to accept their “humanity” as well, which is huge for the progression of the plot.

As with the first book, I feel this story is whole and complete. The epilogue makes me excited for the last book in the series, though, and I am looking forward to figuring out how much more we can learn about this massive world Sirois has crafted! Highly recommended!

As with the first book, this is definitely all-ages appropriate from a content standpoint. No bad language, no sex, and violence is minimal/comic booky in nature. There are deaths, but Krunations and Denarians simply turn to ash when they die so even then they aren’t gory like a human death would be.

A note (for any who care): there are some monotheistic religious undertones that are unsurprising considering the savior-styling of the protagonist, but Sirois does a really good job of keeping this less of an allegory and more of a connection to Earth and the readers and not “preachy” at all.

There are some romantic elements in this tale and things are a little more adult (in complexity, not in content) which is the only reason I recommend more of the 12+ range over a 10+ range. A mature and strong reader of any rage could enjoy this story/series, though, due to the all-ages level content.