Ever Upward (The Excelsior Journey, #2) by George Sirois, Books for Boys Review

Tales of the Peculiar by Ransom Riggs, Books for Boys Review 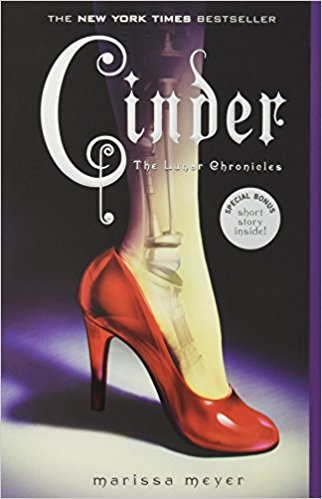 Humans and androids crowd the raucous streets of New Beijing. A deadly plague ravages the population. From space, a ruthless lunar people watch, waiting to make their move. No one knows that Earth’s fate hinges on one girl. . . .

Cinder, a gifted mechanic, is a cyborg. She’s a second-class citizen with a mysterious past, reviled by her stepmother and blamed for her stepsister’s illness. But when her life becomes intertwined with the handsome Prince Kai’s, she suddenly finds herself at the center of an intergalactic struggle, and a forbidden attraction. Caught between duty and freedom, loyalty and betrayal, she must uncover secrets about her past in order to protect her world’s future.

Having recently enjoyed another scifi fairytale retelling, I was may more excited to dive into this one. Unlike the last one I read (Melanie Karsak’s Curiouser & Curiouser, a steampunk Alice’s Adventures in Wonderland retelling), there are way fewer reminders throughout the course of this book that it even *is* a retelling. Meyer started with “Cinderella” as a foundation, but she made it so completely unique that it’s hard to even consider it a true retelling.

The depth of the medical science aspects in this book is fantastic. Meyer clearly dug deep to try to make both her technology and her biomedical elements feel real. I never had a moment while reading where I had to suspend disbelief to a level that didn’t work within the story and that is sometimes hard to do with good scifi.

Every once in a while, there are reminders that we’re in a retelling (ish) such as the fact that one of Cinder’s cyborg parts is her foot. But there are also times where Meyer flips a portion of the retelling so fantastically that it reminds us of the retelling because of its contrast (example: when Cinder arrives at the ball, she catches everyone’s eye… but not for the same reason as in the original). The modification on the relationship with the evil stepmother and stepsisters (the fact that one of them actually isn’t evil and mean is so wonderful) is another great flip.

Overall, this was an amazing story and I can’t wait to dive into the rest of the series. At this point, it’s just an awesome cyborg-centered scifi with intergalactic implications that I just can’t wait to experience!

Again unlike the last fairy tale retelling I reviewed, this one is most definitely all-ages appropriate. There is, of course, the romantic angle of things (I mean, Meyer couldn’t remove that from a Cinderella story!) but it is simple. It isn’t the “head over heels” early-Disney stuff, either, which shows a progression away from the criticized parts of old fairy tales. There are no language or sexual issues. There is some scifi level violence (including some death, but nothing gruesome).

Where the content gets deeper and what makes me rate this more 12+ versus all ages is the depth of the social issues grappled with in the story. The outcasting of both Cyborgs and Lunars delves into some serious racism/xenophobia problems that parallel reality in a fantastic way. Meyer handles them deftly and not in a heavy-handed “hit you over the head with a moral” way, and the narrative is all that much better because of it. So still content-appropriate for younger audiences, but some increased maturity will improve the experience a lot.