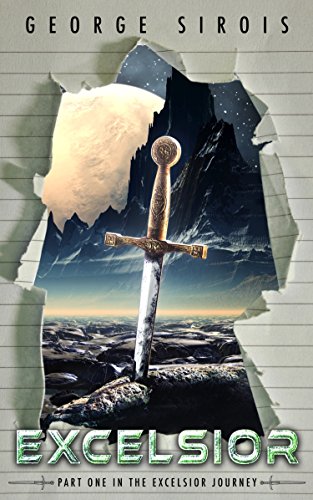 High school senior Matthew Peters thinks he’s just writing some online fiction about an alien superhero, Excelsior. But when a woman arrives at his school claiming to be from the distant planet he’s writing about, he must think again. What’s more, she says Excelsior’s lifeforce lives within him.

As an alien assassin tries to kill him, Matthew must decide what is more important: to save his own life or to retrieve an ancient artifact that could save two worlds. To stay the guy with growing online popularity, or lose himself to something he can’t understand. Whatever his choice, he must face an enemy more powerful than him in almost every way.

Hold on to your seat as you race through the first book in George Sirois’ series, The Excelsior Journey, a story that will leave you gasping for breath and wanting more.

Put down the pen.
Pick up the sword.
Unleash the hero within.

It is worth noting that this will not be the first time I review this book on my blog. I reviewed the first edition back in 2011 as part of a blog tour here: Blog Tour de Troops – Review of Excelsior. I spoke glowingly of it then and I still feel the same about this latest edition.

That being said, this newest version is definitely “new and improved”. The core feel and plot hasn’t changed at all, but Sirois added some nice depth to some of the history of the Denarian (good guy aliens) characters and some nice new wrinkles in the relationship between Matthew and his uncle Jason. What I surmised from reading this new version of the story is that the author’s storytelling ability has only gotten better, especially his ability to add character depth. This makes me even more excited for the upcoming sequel he has been teasing for a few years!

For those that didn’t click on the link above to my old review, let me refresh my thoughts on the story. As I have said before, it reminds me of two 90s favorites of mine: a movie called Cool World and a Sega Genesis game called Comix Zone. That isn’t to suggest that Excelsior is unoriginal at all, just that it reminded me of those pieces of pop culture. Any creator would love to find themselves in Matthew’s shoes, I think. Finding out that the world you “created” is actually real (like in Cool World) and that you now have to become the hero in your own story (like Comix Zone)? Isn’t that why we create in the first place, to escape?

All that said and done, the story feels even more polished this time and some of the depth added to the Denarian characters makes the story feel even less alien this time. Matthew’s transition into Excelsior himself feels fluid and realistic (in the context of the lore built into the story) and you can almost hear the dramatic music by Hans Zimmer building during that scene. All in all, this is an extremely fun story with adventure, deep relationships, and enough action to keep the pace up-tempo right up until the end.

It’s a sci fi adventure starring a teen. There’s really no content that is out of place to scare off potential readers. There are deaths, even on-screen deaths (as I call them), but nothing bloody or gory. Our big bad, Danaak of the Krunation Empire, uses what basically amounts to a disintegration ray as his primary weapon so most of his kills result in people burning to a pile of ash, cartoon-style.

There are no language or sexual content concerns at all, so outside of the mild PG13 violence that wouldn’t be out of place in a Marvel Cinematic Universe film, it’s more than appropriate for all ages. I suggest 12+ for the book simply because Matthew is a little older and some of the relationship struggles he faces (death of his parents, his uncle’s struggles with alcoholism) are a little older concepts for relatability. As before, I give this book 5/5 and can’t wait for Ever Upward!