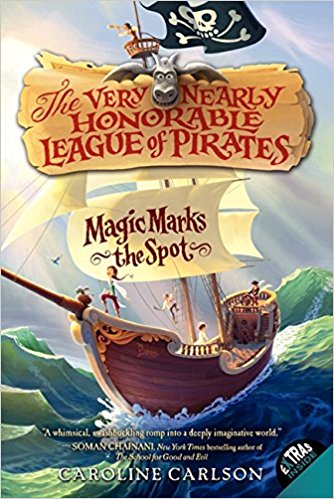 Hilary Westfield has always dreamed of being a pirate. She can tread water for thirty-seven minutes. She can tie a knot faster than a fleet of sailors, and she already owns a rather pointy sword.

There’s only one problem: The Very Nearly Honorable League of Pirates refuses to let any girl join their ranks of scourges and scallywags.

But Hilary is not the kind of girl to take no for answer. To escape a life of petticoats and politeness at her stuffy finishing school, Hilary sets out in search of her own seaworthy adventure, where she gets swept up in a madcap quest involving a map without an X, a magical treasure that likely doesn’t exist, a talking gargoyle, a crew of misfit scallywags, and the most treacherous—and unexpected—villain on the High Seas.

Written with uproarious wit and an inviting storyteller tone, the first book in Caroline Carlson’s quirky seafaring series is a piratical tale like no other.

Pirates. And Magic. That’s really all I have to say to start off this review. Carlson has done a fantastic job of taking the tried and true stereotype of Victorian-era pirates that has so immersed popular culture that if you simply say “pirate” you imagine just the type of pirates she presents in this book and adding both a magical and whimsical element. This book reminded me a lot of Muppet Treasure Island, a story where pirates are both “fun” but still “bad” at the same time. Think Captain Jack Sparrow from Pirates of the Caribbean… he’s not a “good” guy but still good enough to be a protagonist.

Hilary is a wonderfully pleasant main character. She is a proper “lady” with all of her manners, only she wants to be a pirate. With her best friend The Gargoyle at her side, nothing is going to deter her from completing her goal. She maintains all the proper decorum one would find in a Bronte novel while casually discussing running people through and hunting for buried treasure. The combination of Elizabeth etiquette and piracy is just delightful.

The insertion of magic in this world, though, is what really brings a unique element to this book. Not only does it set up one of the coolest unexpected twists, but it also gives a much more important facet to the world of pirates hunting treasure than just greed and accumulation of trinkets and gold. Couple that with the wonderful Gargoyle character, and this book is just magical good fun.

Appropriately targeted towards a middle grade and up audience, Magic Marks the Spot has zero concerns. Akin to my references above, the dangerous aspect of piracy is mostly muted for the reader (there are off-screen deaths and plenty of mentions of being run through and walking the plank, but no real violence or death on the page). Even the biggest swordfights and pirate battles end up comical and cartoonish in nature and nothing is scary. There are no language concerns (with any references to cursing being vague and without specific dialogue repeated) and sex isn’t even on the radar.