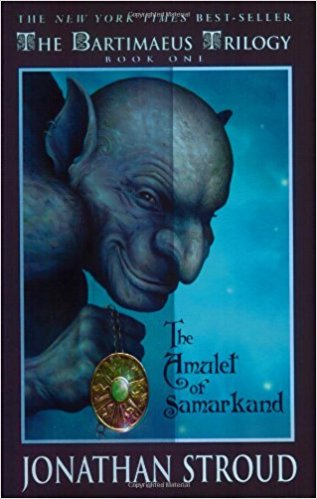 Nathaniel is a magician’s apprentice, taking his first lessons in the arts of magic. But when a devious hot-shot wizard named Simon Lovelace ruthlessly humiliates Nathaniel in front of his elders, Nathaniel decides to kick up his education a few notches and show Lovelace who’s boss. With revenge on his mind, he summons the powerful djinni, Bartimaeus. But summoning Bartimaeus and controlling him are two different things entirely, and when Nathaniel sends the djinni out to steal Lovelace’s greatest treasure, the Amulet of Samarkand, he finds himself caught up in a whirlwind of magical espionage, murder, and rebellion.

Nathaniel may be the main character in this book. But there is no doubt that Bartimaeus is the real star. Through his snark and sarcasm, he shows why djinni aren’t easy creatures to just boss around (especially by a young summoner like Nathaniel). Stroud uses the “footnote” feature of books in a brilliant way, letting us get an alternate narrative voice (Bartimaeus’s directly) in the middle of the main narrative. The breaks are usually humorous but, at other times, show the depth of the history Stroud would use years later to write the prequel to this trilogy.

Nathaniel is one of my favorite antagonists of magical fantasy stories. His growth throughout the series is fantastic and the conclusion to the third book is one of the most memorable endings of any series I’ve ever read (and that’s saying something!). Don’t worry, I won’t spoil it!

The amount of detail and history in this book is fantastic. In a Harry Potter-esque way, the author pulls from a ton of different history, mythology, and folk stories to put together his world. In the end, he ends up with something that has plenty of familiarity but also something very different as well. I would highly recommend this book to any kids (especially any with a sharp wit that would see themselves in Bartimaeus and, to an extent, Nathaniel).

The book is more than appropriate, if not a little challenging at times. While Nathaniel is 11, thus making this an appropriate middle grade book with the right aged protagonist, Bartimaeus is far older… and the antagonists are more often adults. This raises the level of intrigue but, fortunately, not the level of appropriateness. There are PG13 levels of violence and suspense but language and sexual content are not issues. Stroud does a good job of creating an adult-level situation but telling the story in a way appropriate for middle grade audiences.