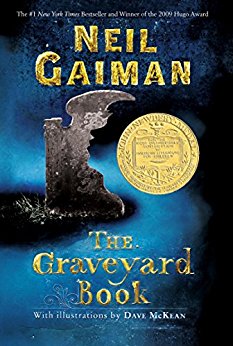 Bod is an unusual boy who inhabits an unusual place—he’s the only living resident of a graveyard. Raised from infancy by the ghosts, werewolves, and other cemetery denizens, Bod has learned the antiquated customs of his guardians’ time as well as their ghostly teachings—such as the ability to Fade so mere mortals cannot see him.

Can a boy raised by ghosts face the wonders and terrors of the worlds of both the living and the dead?

Any book that opens with the murder of three people is sure to entice any reader who is into things a little macabre. The Graveyard Book is no exception to this concept. For that matter, anyone familiar with some of Gaiman’s other works for younger audiences (Coraline, Stardust) shouldn’t be surprised at the darker material contained within.

An interesting connection that I didn’t make until I was listening to the author himself read an essay he wrote as a backmatter piece for the audiobook version I listened to is that, at its core, The Graveyard Book is a reimagining of Kipling’s The Jungle Book. Only instead of being raised by wild animals, our protagonist is raised by the denizens of a graveyard, his adoptive parents being ghosts (instead of wolves) and his main instructor/guardian being a vampire (instead of a panther).

Even though the concept is borrowed from a previous work, the result is a completely unique story. One of the things that I loved the most was how Gaiman was able to get into Bod’s mind and motivations at various stages in live, ranging from infant to teenager. It truly felt as though we were able to get into his head and learn and grow along with Bod. Part of the reason this worked so well was that each chapter felt like a closed unique short story in and of itself. As each chapter/story is told at a different age for Bod, it really felt like the story was written more in an episodic nature, with an overarching storyline threading them together but a complete story within each chapter.

I really want to know more about Silas and Miss Lupesco and the Honor Guard that is only touched upon throughout the story. I could imagine a wonderful Gaimain-penned version of The League of Extraordinary Gentlemen starring these characters (or, hey, maybe Gaiman should run Universal’s new attempt at a Monster Universe series of films [one could hope]). Either way, I loved every aspect of this book and really hope Gaiman has more in the tank for this world in the future.

Well, the book literally starts with a triple murder. That being said, the dark nature of the book as set from the beginning is tempered repeatedly by the innocence of Bod learning of all the supernatural aspects of the graveyard and its inhabitants through the eyes of a growing child.

As I said above, Gaiman is known for “darker” material even with his books for young audiences. There are no bad words (only alluded to),  extreme gore (again, death is an obvious common thread but not extreme violence), or sexual concerns at all. It’s all-ages appropriate within the context of the necessarily macabre nature of the setting and its characters.