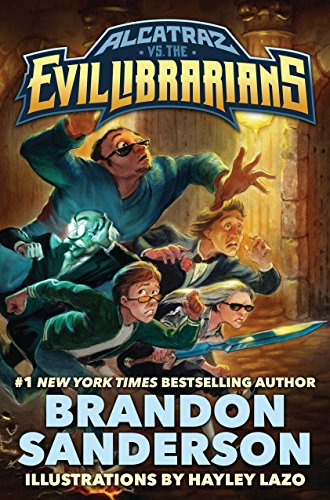 Alcatraz Versus the Evil Librarians is the first adventure in a fantasy series for young readers by the #1 New York Times bestselling author Brandon Sanderson. The fast-paced and funny series is now available in deluxe hardcover editions illustrated by Hayley Lazo.

On his thirteenth birthday, foster child Alcatraz Smedry gets a bag of sand in the mail-his only inheritance from his father and mother. He soon learns that this is no ordinary bag of sand. It is quickly stolen by the cult of evil Librarians who are taking over the world by spreading misinformation and suppressing truth. Alcatraz must stop them, using the only weapon he has: an incredible talent for breaking things.

Before I get to why I would recommend this book, let me first say that I fully understand why teachers and librarians would recommend it on the basis of the overwhelming amount of direct reference to literary themes and techniques. To me, however, this was the weakest part of the entire book.

Told in the first-person, Sanderson uses the fact that this is an “autobiography” to regularly break the fourth wall and directly expatiate on the methods of storytelling and writing. To me, this is one of the biggest pet peeves I have with middle grade books that have a tendency to “talk down” to their intended audience with such direct and blatant exposition.

That being said, if these bits were removed (and could easily be done, since they are often in the beginning of chapters), the fantasy story *behind* this nonsense is quite brilliant. Alcatraz is a very relatable protagonist and the uniqueness of the world and the Smedry magical “talents” (all of which seem silly on the surface until their true usefulness comes into play). The duality of the world Sanderson built is also fantastic, between the Hushlands (eg, the world we know as filtered through the control of the Librarians) and the world as Alcatraz learns it to be.

As a parody writer, I am a fan of twisted tropes and fourth wall breaking, and Sanderson uses his “autobiography” method of storytelling to find plenty of ways to do this, seemingly referencing the silliness of several major fantasy stories throughout this telling. Overall, I really enjoyed this story and just wish he didn’t have the numerous bits that interrupted the flow of the story time and again.

This is more than appropriate for a middle grade (as low as 8  years) audience. There is no concern for language or sexual themes at all and there is minimal violence. There are references and scenes concerning torture and the violence is real, but nothing is described in too vivid or overly horrific detail as to make it unfit for young audiences.