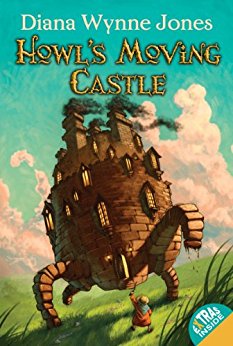 Sophie has the great misfortune of being the eldest of three daughters, destined to fail miserably should she ever leave home to seek her fate. But when she unwittingly attracts the ire of the Witch of the Waste, Sophie finds herself under a horrid spell that transforms her into an old lady. Her only chance at breaking it lies in the ever-moving castle in the hills: the Wizard Howl’s castle. To untangle the enchantment, Sophie must handle the heartless Howl, strike a bargain with a fire demon, and meet the Witch of the Waste head-on. Along the way, she discovers that there’s far more to Howl—and herself—than first meets the eye.

Since I generally like to address when books that were made into well-known film adaptations, let me start off by pointing out that the (beautifully done and Academy Award nominated) Miyazaki adaptation is vastly different from the book. Miyazaki’s film uses the same core concepts but the entire “war” subplot and the much more sympathetic and likable Howl character make the film really different from the book. They are both great for their own reasons but I just felt it was important to note that the book is a really different experience.

Unlike the film, the book feels more like a fairy tale fantasy than that steampunk/adventure story of the film. From the word go, the story feels more like Little Women than Wizard of Oz. By the midway point, the two concepts merge into an amalgamation of the two. The courting/romance plots of Sophie’s sisters (which is cut from the film) is really important and weaves the extra layer of mystery and “ah-ha” moments throughout the story. The mysterious origin of Howl (and Wizard Suliman) demonstrate how this world is connected to but separate from our world (in an Alice in Wonderland sort of way).

Sophie Hatter is the key reason this book is so delightfully wonderful. She is one of the greatest irreverent heroines I’ve read. What I mean by this is that she just takes whatever comes without any complaint and pushes on. Her ability to just accept being turned into an old woman with basically a shrug of her shoulders early in the book really sets the tone for her ability to face any situation with casual dismissal and steadfast determination. Sophie’s attitude sets the pace for everything in the story and it’s quite refreshing.

Overall, it would be a travesty if I don’t mention Calcifer in this review. Sophie is amazing. Michael is fun. Howl is a brooding, whiny teenager throughout. Calcifer, though, is a snarky fire demon who also serves as one of the few continuous comic relief characters. (Sidenote: Billy Crystal voicing Calcifer in the film was a perfect casting.) In addition to his sarcasm, he provides a lot of the foreshadowing that pulls the plot together between the missing prince, Howl’s attitude, and the Witch of the Wastes’ motivations. He may seem like he’s just a fire for cooking bacon, but Calcifer is the glue that keeps the story from falling apart throughout.

This story is a wonderful read appropriate all the way down to middle grades. It is an easy read and even a strong 8+ reader could handle it without issue. There are no sexual, violent, or language concerns either. There are romantic subplots in the book but they are very simple and Victorian in nature (eg, the girls fawning over who they’re going to marry and all) but it is far from a “kissing book”.