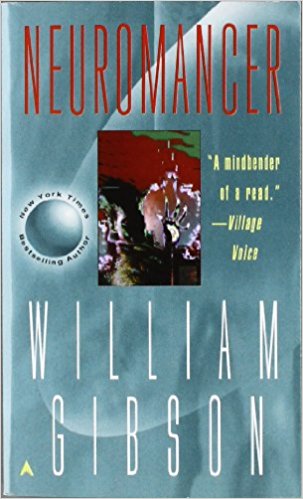 The Matrix is a world within the world, a global consensus-hallucination, the representation of every byte of data in cyberspace…

Henry Dorsett Case was the sharpest data-thief in the business, until vengeful former employees crippled his nervous system. But now a new and very mysterious employer recruits him for a last-chance run. The target: an unthinkably powerful artificial intelligence orbiting Earth in service of the sinister Tessier-Ashpool business clan. With a dead man riding shotgun and Molly, mirror-eyed street-samurai, to watch his back, Case embarks on an adventure that ups the ante on an entire genre of fiction.

The winner of the Hugo, Nebula, and Philip K. Dick Awards, Neuromancer was the first fully-realized glimpse of humankind’s digital future—a shocking vision that has challenged our assumptions about our technology and ourselves, reinvented the way we speak and think, and forever altered the landscape of our imaginations.

In a world that way more approximates the imagined world of Neuromancer, it is important to look back at the originators from time to time. I had personally never read Neuromancer or really any cyberpunk. I sought to remedy that and social media universally told me I should read this book as my introduction to the genre. Insomuch as I can be introduced to a genre that has skyrocketed in popularity in the last twenty years (especially after the success of a little 1999 film called The Matrix, which unapologetically borrows a ton of its concept from Neuromancer). Throw in a little game called Shadowrun and you’ve got the makings for a massively popular sub-genre on your hands.

As with any science fiction, it’s important to look at it in the context of the time it was written and published. It’s really hard to look at older SciFi (and I can’t believe I’m saying that 33 years ago constitutes “older” but I digress) in the context of a current worldview when many times the “futuristic” technology of the story has been superseded by existing technology. In this case, I think we’re closer to living at the threshold of Gibson’s story than being past it, so it’s actually fun to read right now. Gibson had his finger on the pulse of the future of networked computing (“cyberspace”) and human augmentation with cybernetics (still “cutting edge” technology) so it doesn’t feel like it was written three decades ago.

At its core, Neuromancer is a heist story. That is to say: a group of people are put together to commit a crime and each of them have special talents that befit the intended action. Case, for his part, is a reputable hacker who, in addition to his skills, has a potent toxin in his system that allows his employer (“Armitage”) to hold him hostage to ensure he does his job. All future technology, cybernetics, and world-building aside, the story plays out like a heist-gone-sideways where the players have ulterior motives and you don’t really know who the main characters are even working for (even when you think you know).

The drug and sex content (more on the content below) are not really plot drivers so much as they are window dressing to color how disparate the world of Neuromancer has become. In many ways the Matrix serves as just another form of escapism (if the drugs aren’t enough), which is a lot of where the social commentary of the story comes in. Rich people have better access and better lives and poor people are left to the drugs and despair.

As both a genre-producer and a stand-alone story, Neuromancer holds up wonderfully to time. That may change in the coming decades but at this moment, I’d consider it a must-read for anyone interested in cyberpunk and its various iterations. A brilliant story with strong characters and an amazingly groundbreaking world.

Let’s be really up front here that this book has sexual content, copious drug use, and pervasive cursing. This is an adult book. I am reviewing it here and used the 15+ tag because I still think it is appropriate for a 15 year old whose parents are aware of these content warnings and wants to introduce a kid to the book that arguably *created* the concept of cyberspace years before it existed.

In my opinion (as a parent and an educator), if you’ve waited until they are 15+ before talking about any of these issues (sex and drugs especially), someone else has already educated your teen. There’s no reason to throw out a masterpiece of literature because it contains things that kids will see online at every turn anyway. Better to educate than ostrich. /endopinion

Of course, we don’t want anyone telling us what is and isn’t appropriate for our own children (looking at you, school boards banning books like To Kill A Mockingbird and Catcher in the Rye). That doesn’t mean we shouldn’t be informed of what’s in a book so we can decide if it’s right for our kids and that’s all I’m trying to do here. Okay, now for real /endopinion