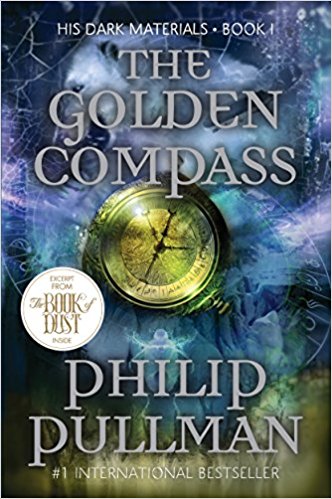 Lyra is rushing to the cold, far North, where witch clans and armored bears rule. North, where the Gobblers take the children they steal–including her friend Roger. North, where her fearsome uncle Asriel is trying to build a bridge to a parallel world.

Can one small girl make a difference in such great and terrible endeavors? This is Lyra: a savage, a schemer, a liar, and as fierce and true a champion as Roger or Asriel could want.

A masterwork of storytelling and suspense, Philip Pullman’s award-winning The Golden Compass is the first in the His Dark Materials series, which contintues with The Subtle Knife, and The Amber Spyglass.

Note, while this book is better known as The Golden Compass, I wanted to acknowledge that it was a completely different name when released in the UK originally (Northern Lights). The subsequent movie was also called Golden Compass so we’ll go with that from now on. But wanted to point that out to start.

This book (well, the whole series) is one of my biggest inspirations for writing middle grade/young adult fantasy. Funny thing is, I didn’t even realize it was part of the steampunk genre until I was setting up the page for this review. I didn’t know what steampunk was back when I read it years ago so maybe that’s why. As it stands, this series is an awesome way to introduce to youngsters the concept that really complex science can present itself as magic (as is a lot of the crux of what makes steampunk so unique).

Onto the book itself! Lyra Belacqua is one of my favorite fantasy heroines. She is established very early on to be more “tomboyish” of a young girl, running wild around the town with her daemon Pantalaimon along with the little boys. Her friendship with Roger is wonderfully devoid of romantic entanglements, which is always refreshing when you have opposite-gender friends in a middle grade book.

Throw in an awesome cast of characters with complexity and depth in her “uncle” and the awesomely complex Mrs. Coulter who you are constantly wondering which side she’s on (a la Severus Snape in Harry Potter).  And all this is before we even get into the panserbjørne (AKA: GIANT INTELLIGENT ARMORED BEARS!). Sorry, don’t mind me. I loved the panserbjørne from the second they were introduced.

Aside from all the uniqueness, what we have here at the core is a simple “going on an adventure” plot that places Lyra into difficult situations and forces her to use her intelligence to get out of sticky places. The elevation of the plot throughout the series and the nefariousness of the Church just throw more fuel to a superior story.

This is more than appropriate for all ages. There are no concerns about violent scenes (although there is death, and giant fighting armored bears) from a blood/gore standpoint and language and sexual content are non-existent.

*Some* may be turned off by the Anti-Church sentiments and I didn’t want to ignore that concept. I’ve often told people when recommending this series that His Dark Materials is to what atheism as The Chronicles of Narnia is to Christianity. That is, it’s an allegorical story that places a moral lesson supported by the theism of the author. Philip Pullman is an outspoken atheist and the pro-science/anti-Church themes throughout this book are very strong. I don’t think this should turn anyone away from reading this series (even if you’re pro-Church) because it’s important to read alternative views from time to time. However, I felt it would be unfair of me to not mention this facet of Golden Compass to parents/educators who may look to my reviews for guidance.