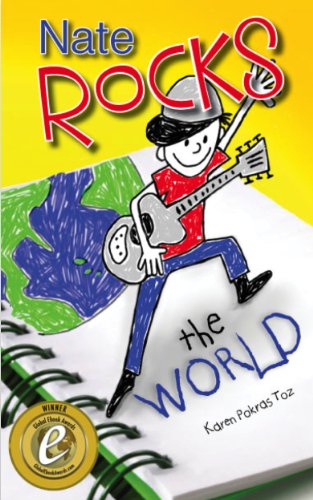 Ten-year-old Nathan Rockledge cannot catch a break. After all, life as a fourth-grader can be hazardous what with science projects to deal with and recess football games to avoid. Everyone, including his best friend Tommy, seems to have bad luck when hanging around Nathan. Throw in an older sister who is a royal pain, a dad who is stuck in the past, and a mom who keeps trying to poison him with her awful cooking, and poor Nathan’s life as a fourth grader appears to be completely doomed.

Armed only with his sketchpad, his imagination, and his wits, Nathan Rockledge navigates the perils of the fourth grade in style, to emerge heroic, as Nate Rocks, proving that even a ten-year-old can accomplish great things.

Not all is lost however. Give Nathan a sketchpad and a pencil and watch as his drawings transform his otherwise hopeless life into heroic adventures as Nate Rocks. Time and again, Nate saves the day – winning The World Series, fighting evil forces to keep the world from darkness and even saving Christmas. When his sister nearly drowns while swimming in the ocean, Nate Rocks the World one more time, proving that even a ten year old can accomplish great things.

Follow the quirky and imaginative adventures of ten-year-old Nathan Rockledge as his cartoons come to life.

When I first read this book description, I actually thought it was a fantasy book (it made me think of ChalkZone, the old Nickelodeon cartoon). In truth, this is actually a pure middle grade literary fiction book and is all the better for it. When I finished reading, my very first thought was: “Nate is Ramona Quimby for boys and the modern generation!” And if you’ve read my #BooksForBoys reviews, you know my very first one was a Beverly Cleary book. Toz does a fantastic job of really diving into the head of her main character and focusing on the things that drive a 10 year old boy’s day-to-day motivations (well-meaning but annoying parents, a pain in the butt big sister, movies and hanging out with his best friend, school).

However, Toz takes this to another level with Nate’s insanely awesome imagination in the form of his drawings and daydreaming. She really captures how easy it is for a single thing (for example, a classmate getting a ‘spy’ pen from a trip to Washington, DC) can trigger a far-fetched adventure in the mind of an imaginative pre-teen boy. Even if it does mean getting in trouble for doodling all over a spelling test.

For the adults in the audience, the story plays out much like The Secret Life of Walter Mitty (most recently adapted into a Ben Stiller movie in 2013), where we are thrown into Nate’s daydreams seamlessly from his everyday world. This is why it’s easy to feel like this could just as well be a fantasy story where Nate’s drawings literally DO come to life (because from his perspective [and ours due to Toz’s smart use of 1st Person Present POV], they DO!). At the end of the day, Nate is a very wonderful character that any young boy could easily relate to and I can’t wait to read the other three books in the series.

This is a perfectly done middle grade book that works for all ages. A strong reader as young as 8 could read it solo but it really does hit that late elementary school/early middle school target absolutely perfectly. There is some talk of middle grade appropriate boy/girl talk (Nate think they’re yucky, his sister is in love with a pop star) but nothing else other than healthy, appropriate family relationships and school interactions. Zero concern about violence, language, or sexuality at all.