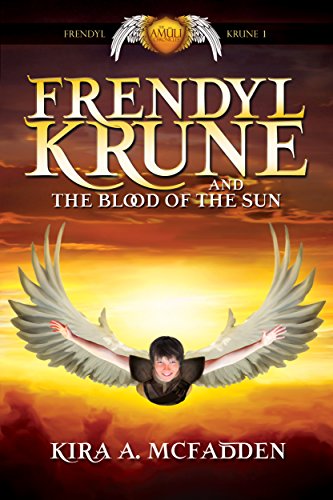 Frendyl Krune wants to be a knight, to serve his family and his people and never fear what may come for him. His goal, however, slips from his grasp when rumors spread that his father possesses a rare and powerful gem. It doesn’t take long for someone to break into his family’s estate, determined to steal the gem.

As Frendyl winds through the Catacombs in search of the would-be thief, he discovers the intruder broke down the magical barrier of the prison and used magic to sneak in and out of the Krune estate without being seen.

To make matters worse, Frendyl learns his father’s control over the city is failing. Talk of revolt scurries through the streets like vermin. If nothing is done, Frendyl’s father will be ousted from power.

To save his family and unite his people, Frendyl joins his Uncle Melroc’s quest for the long-lost gem—the Blood of the Sun. The stone has powerful magical properties, and Frendyl’s father needs it to track down an escaped convict—or so he claims. But, Frendyl’s father isn’t the only one who desires the gem. Others, including a thief on Frendyl’s voyage, will do anything to get their hands on the Blood of the Sun. Anything—including locking Frendyl in a vault of solid rock.

I don’t frequently reference the covers of books I review, but I had to start with that here because it truly is what got me to click on this book in the first place. My favorite Greek myth is Icarus (you know, the one where the inventor Daedalus creates wax wings for he and his son to escape the labyrinth but Icarus’s hubris makes him fly too high, get close to the sun, melt his wings, and fall to his death) so a winged human drew me in right away. Let me start off by saying this: this book has nothing to do with Icarus. But you know what? It’s even better.

The extensive worldbuilding in this book is phenomenal. Amüli are connected to humans via the “soulbound” process but are a species all on their own, an “immortal” race of winged humans. That alone is worth the price of admission. McFadden has an expansive knowledge of her world (as evident by even more Frendyl Krune books and, I am delighted to learn, a connected series targeted for older audiences called Soulbound). Every major and even secondary character in this book clearly has their own history, backstory, and purpose beyond just being dressing for the main character.

The story itself follows a common fantasy plot: a young adventure-seeker takes it upon himself to solve adult problems. It’s a tried and true story format but it works. I felt early on that maybe it was a little pushed, not understanding why Frendyl was so hellbent on being the one to find the Blood of the Sun but as I read on that concern faded and I found myself rooting for him the way we often root for the “teenager chosen one in over his head”. And who knows, maybe his compulsion will make more sense over the course of the next few books?

Frendyl’s companions are fantastic. At first, I had some trouble differentiating the two female Amüli in Jae and Kel (both are atypical irreverent females) but they grew more distinct from one another as the story went on. A testament to how strong the characters are is that I want to know just as much (maybe more) about their stories (as well as Navyni, his warrior friend) and it is clear McFadden has more in store for all of them. I really, really enjoyed this book and heartily look forward to diving more into the world.

There is no content to suggest this would not be enjoyable by any young reader. Sex and language concerns are non-existent and the violence is cartoonish in nature. Physical injuries are predominantly non-worrisome since the Amüli are immortal and have magical healing capabilities (however, it is wonderful how McFadden considers the emotional/psychological injuries that come along with them even if their bones heal). Magical injuries, however, are important and a bigger concern. Either way, there is no blood and gore even if there is a way for these immortals to become “soulless” (the Amüli approximation of death).