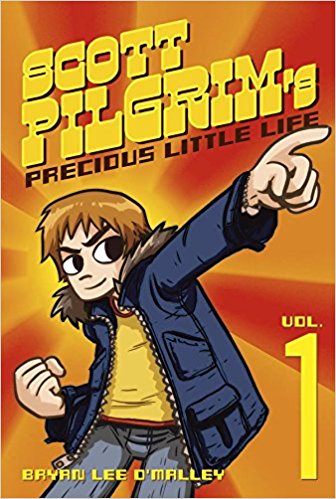 Scott Pilgrim’s life is totally sweet. He’s 23 years old, he’s in a rock band, he’s “between jobs,” and he’s dating a cute high school girl. Nothing could possibly go wrong, unless a seriously mind-blowing, dangerously fashionable, rollerblading delivery girl named Ramona Flowers starts cruising through his dreams and sailing by him at parties. Will Scott’s awesome life get turned upside-down? Will he have to face Ramona’s seven evil ex-boyfriends in battle? The short answer is yes. The long answer is Scott Pilgrim, Volume 1: Scott Pilgrim’s Precious Little Life.

Well, it’s a graphic novel (the first I’ve reviewed here on the #BooksForBoys review blog) so that’s a start. Also, I enjoyed the movie and never read the graphics. /endexplanation

To start, if you’ve seen the movie starring Michael Cera, it almost feels like you don’t even need to read the graphic novel (or at least volume one so far). I’m not sure how fans of the comic responded to the movie, but I don’t think I’ve ever seen a movie adaptation that so *precisely* mirrored the source material. I’m assuming this will continue as I read the rest of the series, but the movie literally feels like a shot-for-shot reproduction of the comic (which is good in some ways but adaptations really should add their own stamp – but that’s a Catch 22 situation).

That all being said and necessary, it’s still an enjoyable read for an older teen looking for a quick and easy graphic novel focusing on relationships from the perspective of a (kind of) dumb and bumbling boy. Usually, “romance” books are targeted to young girls but the heart of Scott Pilgrim ultimately is about Scott’s “love triangle” with Knives and Ramona. Everything else in the story follows from there.

It’s nice and refreshing to see classic romance tropes being flipped around a bit in this story (1 boy, 2 girls instead of the reverse) and, of course, the obvious and repeated references to geeky stuff (Scott’s band being named after a bad guy in Super Mario, the X-Men logo on his jacket, etc.) is fun and even a modern kid will get the references since they are timeless geek allusions and not niche stuff (which, you know, is funny because a lot of the Scott Pilgrim hype I recall from when this first came out was very hipster-ish in nature).

I kinda had trouble classifying this book other than “Graphic Novel” but decided on Urban Fantasy due to the sometimes-magical elements (Ramona literally traveling through Scott’s head, the first evil ex-boyfriend’s Bollywood demon summoning powers, etc.) and, I’m assuming based on the movie, the continuation of similar “gaming” style elements incorporated into the story that makes it more fantasy than pure reality.

All in all, it’s a fun and quick read and I expect to devour the other five books in quick succession. Any teen could read it without issue (see Content section below) and enjoy it. The art style is simple and O’Malley is clearly influenced by Japanese Manga in his illustrations and format (even the story-telling, to be truthful). The heavy use of blackspace in the black and white drawings allows the characters to pop out nicely and nothing interrupts a quick and easy flow for the reader.

Technically, Scott is outside the “YA” range (he is 23) I normally look for. However, like other books I’ve read with older protagonists, the content of the book and his motivations are very much younger in nature and not really classifiable as Young Adult. Even the first (and running) gag is Scott’s relationship with Knives Chau, a 17-year old Chinese school girl (and yeah, his friends and sister immediately point out how cliche that is). The relationships throughout Volume 1 are definitely more juvenile and high school-ish in nature, even Scott’s obsession with Ramona.

There are direct references to sex, especially when Scott goes to Ramona’s house after their first date. No nudity is shown (Ramona is seen in bra/panties), but there is a GREAT lesson in this first “adult” interaction about consent that I think is done nicely and with subtlety. It looks as though they will have sex (after kissing and being near-naked) but Ramona tells him that he’s changed her mind. Scott makes no move to pressure or argue against this. This is an “adult” situation that would do well to be demonstrated to anyone in high school.

In the first book, there are no other content concerns about language or violence (seriously, the first “mini-boss” literally turns into coins like in a video game, it’s that tame). Other than the sexual conversation, especially coming from Scott’s “very gay” roommate Wallace, there’s nothing to stop a mature-enough 15+ (maybe even younger pending parental veto) from enjoying this book.