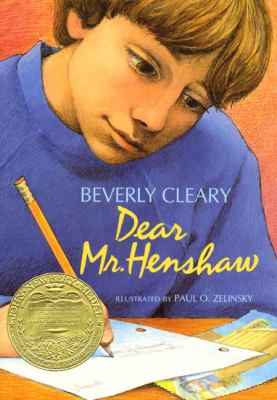 After his parents separate, Leigh Botts moves to a new town with his mother. Struggling to make friends and deal with his anger toward his absent father, Leigh loses himself in a class assignment in which he must write to his favorite author. When Mr. Henshaw responds, the two form an unexpected friendship that will change Leigh’s life forever.

From the beloved author of the Henry Huggins, Ramona Quimby, and Ralph S. Mouse series comes an epistolary novel about how to navigate and heal from life’s growing pains.

I decided to review this book as the first one on my Books for Boys blog for a very personal reason: this is the book I recall that both got me in love with reading and also made me want to be a writer. In preparation for this review, I reread the book to see how different it is with 35 year old eyes instead of 8 year old eyes and this is what I learned:

I am still Leigh Botts, but grown up. In one of the first letters, Leigh wrote “when I grow up I want to be a famous book writer with a beard like you.” And that’s what I became! Also, I remembered a major reason why I felt this story connected with me as a youth. Leigh’s experience with a hard-working single mother and an often absentee (but likable) father mirrored my childhood exactly. Cleary handles this situation that has become more and more common in complex family structures and does such an amazing job of filtering it through the eyes of a middle school boy.

I also think that the first-person perspective and epistolary (meaning, a series of letters presented as a story) makes the material extremely accessible to any young reader. Further, it handles very challenging pre-teen situations such as divorce, being a new kid at school, & being bullied (his special lunch foods being stolen repeatedly) with a finesse that makes you feel like it actually was written by a sixth grade boy. She even does a great job of demonstrating some of the angsty rage that ebbs and flows in such a person throughout the book.

This book is more than appropriate for anyone even younger than middle school. Since it is written in first-person from Leigh’s perspective, the language selection and sentence complexity are simplified as well. This adds to both the realism of the book and the ease of accessibility.

Obviously, as is well known with an author like Beverly Cleary, there is no age inappropriate content to scare away parents that might be concerned about such things. The most difficult emotional material stems around the divorce and broken promises by Leigh’s dad, but you can tell by the end of the book that Leigh is well on his way to accepting the positive aspects of his father along with understanding his shortcomings.