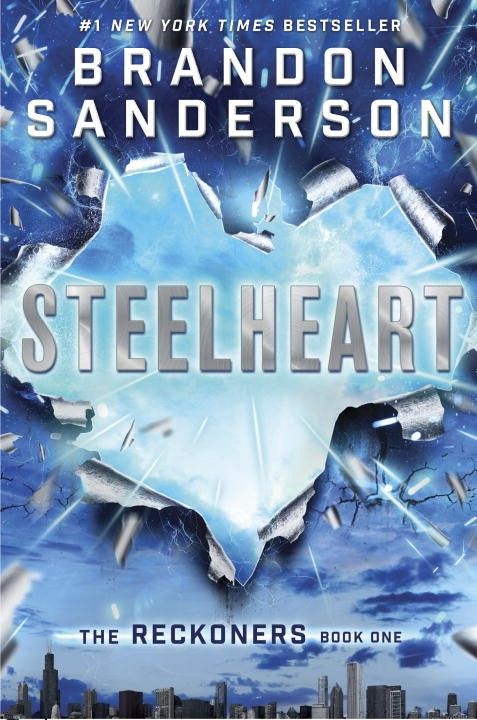 Ten years ago, Calamity came. It was a burst in the sky that gave ordinary people extraordinary powers. The awed public started calling them Epics. Epics are no friends of man. With incredible gifts came the desire to rule. And to rule man, you must crush his will. Now, in what was once Chicago, an astonishingly powerful Epic named Steelheart has installed himself as emperor. Steelheart possesses the strength of ten men and can control the elements. It is said that no bullet can harm him, no sword can split his skin, and no fire can burn him. He is invincible. Nobody fights back . . . nobody but the Reckoners. A shadowy group of ordinary humans, the Reckoners spend their lives studying Epics, finding their weaknesses, and then assassinating them. And David wants in. When Steelheart came to Chicago, he killed David’s father. For years, like the Reckoners, David has been studying, and planning, and he has something they need. Not an object, but an experience. He has seen Steelheart bleed. And he wants revenge.

Brandon Sanderson in his Reckoners series has done an amazing job of turning the prototypical superhero genre on its head. His concept is simple enough: random people start getting superpowers. After that, comparisons to your typical superhero stories end. He does a great job establishing immediately in the prologue that Epics are not the X-Men, Avengers, or Justice League. There is enough familiarity to the concept of super-powered humans to rope a young reader in, however. The unique powers granted to Epics (bulletproofing, flight, fire manipulation, etc.) can easily make one feel they are reading a comic book story.

At the same time, the story as it follows David feels less like a comic book story and more like a guerrilla war story with the illusive Reckoners using strategy, knowledge, and a bit of unpredictability to fight against the Epics in the dystopian future left when the Epics take over the world, a city at a time. Fans of video games with a focus on weaponry (like Call of Duty or Battlefield) will enjoy how important weapons are in this world and how much attention goes into describing and using them. In a world where regular people are trying to fight against near-godlike entities, it makes sense that their weapons would become so important to them.

David is a wonderful main protagonist. He uses his knowledge of seeing Steelheart bleed (the only one alive who has ever seen this happen) as a bargaining chip to get in with the Reckoners. As one of many orphans in Newcago (the new name of Chicago after Steelheart takes over), David developed an unhealthy obsession with revenge and learning about Epics in general. He claims to not be a nerd (repeatedly) but his social awkwardness due to his singular focus on Epics is evident. He has a unique quirk wherein he is extremely poor at using metaphors that Sanderson uses expertly to demonstrate this throughout the book.

The story plays out almost like a video game, with some of the lesser Epics that work for Steelheart serving as mini-bosses and the downtime in between large-scale battles being filled with intelligence gathering and backstory filling. With this type of storytelling, gamers will definitely enjoy the flow of the narrative.

Steelheart is more than appropriate for late middle grade on up but will be most enjoyed by teenagers and up, I believe. There is violence and plenty of death (most of it “off-screen” so to speak), but Sanderson does not go into explicit detail or gory descriptions that would upset a delicate reader. Any youth who plays war-based video games will feel right at home with the heavy descriptions of guns and weapons and the military style tactics of the Reckoners.

There is no explicit language that I can recall (perhaps your occassional minor curse, but even then, Sanderson created his own vernacular for expletives like “Calamity”, “Sparks”, and “Slontz”). There is also no sexual content in this book. While David is a teenage boy and definitely notices girls (especially Megan, one of the Reckoners on the team), this is merely a minor plotpoint and romance (at least in the first book) is not really a major factor. David is too focused on his revenge to have time for it.