So I have to admit that I’ve been struggling these past few years to really get my bearings back under me as a writer. Even on my blog here I’ve had numerous false starts. Such as this one back in March of 2015 or my memorial of my best friend in July of 2015. A lot of it stems from a post I did years ago about Second Novel Doubts. And when I say years ago, I mean back in August of 2011, the same year my debut novel Toonopolis: Gemini was released.

I’ve blamed any number of things on my inability to get more written, even though I’ve had a few short stories published since then as well as the Anchihiiroo: Origin of an Antihero novella. I am, after all, a stay-at-home dad to three boys and spend a good chunk of my time caring for them, my house, and my wife who works a lot of hours in a very high stress job. I mean, who could blame me for not getting more significant writing done, right?

But the truth of the matter is that I’ve been struggling with some serious imposter syndrome. For any unfamiliar with the term, it basically is a case where someone internalizes their accomplishments for fear of being found out a fraud. Despite my “success” (which I put in quotes because that term is extremely subjective) as an author, I still don’t even tell people I’m a writer when they ask what I do. Even the marginalized stay-at-home dad position feels less fraudulent to me than telling people I’m a writer. Which, in and of itself, is a silly thing.

I’ve been working on Toonopolis: Chi Lin, the sequel to Gemini and continuation of my Toonopolis Files series off-and-on since 2011 (mostly off) and up until last week I had about 17,000 words done on it in that period of time.

But then something happened. I’ll sum it up in a text message conversation I had with a friend shown below (NSFW language contained therein): 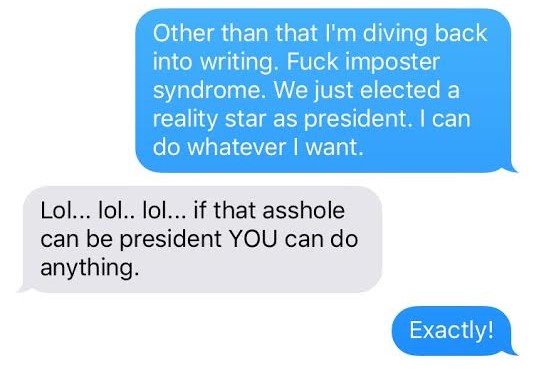 And there you have it. Politics aside (that’s a whole can of worms I’d rather avoid in this forum), I can thank Donald Trump for snapping me out of my funk. Since the election last Tuesday, I have added around 7,000 words to Toonopolis: Chi Lin and have found new ways to break the excuses that have been keeping me from writing. I still have kids to take care of. I still have plenty to occupy me. But I won’t allow my own mind to convince me that I am a fraud for wanting to be (cause I already am!) an author.

I wrote about 200 words on my phone while waiting in the carpool lane to pick up one of my kids at school a few days ago. Over the weekend, I took my laptop with me and worked while my 6yo was at a birthday party. I’m finding ways to write. I’m finding the motivation and desire to tell my stories again. I’m not an imposter. I’m a writer and I’m gonna do what writers do! If we can elect a reality star with zero experience as our next president, why the hell can’t I call myself an author and write my books? No reason.