My Little Pony: Friendship Is Magic (A Review)

Once again I am going to try something new.  Inspired by a guest post I did over at Your Need To Read blog about reboots and updated versions of shows (Check It Here), I am taking on an entirely new concept for a review: I’m reviewing a show designed for girls.  Yep, that’s right.  I’m going to review My Little Pony: Friendship is Magic. 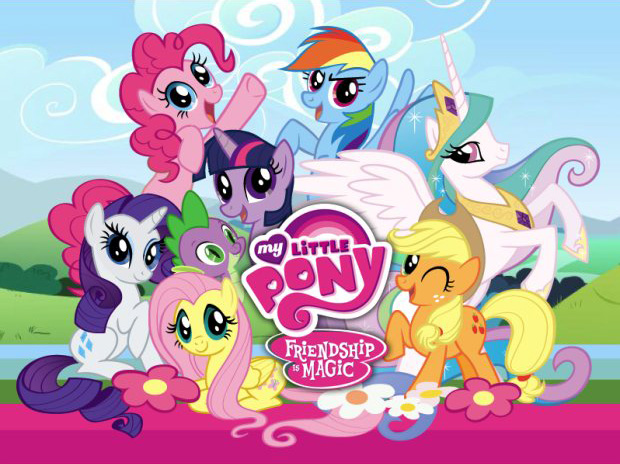 I am going to start off with an explanation.  When researching other reboots for the above-mentioned guest blog post, I wanted to at least reference a few shows that were designed for girls.  I mean, I would have gladly discussed military men (GI Joe), transforming robots (Transformers), and anthropomorphic feline warriors (Thundercats), but I felt, for the sake of gender equality, I should discuss the other lady-targeted cartoons.  Upon reading about the new My Little Pony, I came across the term “brony.” A brony, for those not in the know, is a male fan of this new version of My Little Pony.  The fact that an entire subculture exists for male Pony fans means I had to look into it.

The voice cast is very diverse.  Even though the cast is pretty much all women, they have done a good job of making each character have its own distinct voice (which is very awesome for a “girl” show where a lot of times the characters are interchangeable).  Tara Strong (Fairly OddParents, Powerpuff Girls, Teen Titans) is the biggest star and voices the lead role of Twilight (the purple unicorn pony).  The rest of the cast is an amalgamation of wonderful female voice actors known for anime, video games, and other “girl” shows like Strawberry Shortcake. Ashleigh Ball is a shining star, voicing both Rainbow and Applejack.  She shows great range.  She’s only had minor roles before My Little Pony, I think she’s gonna break out and be around for quite a while. 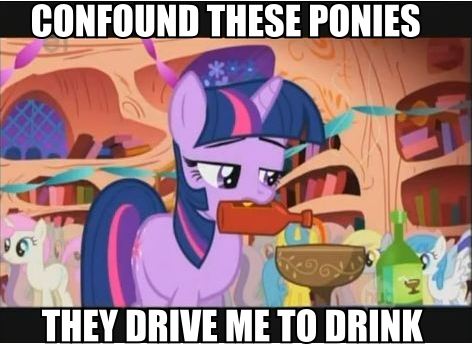 They aren't that bad Twilight...

What amazed me the most while watching episodes of the show (which was hard to do, as my six year old boy kept running and screaming, “It’s a girl show!” every time I tried to watch an episode), was how amazingly defined and diverse the characters are.  Usually, you can use one word descriptions for characters in girl cartoons.  For example: Powerpuff Girls (Blossom=leader, Bubbles=ditz, Buttercup=tomboy).  My Little Pony though really takes the characters to another level.  Applejack is more than just a tomboyish country girl; she also demonstrates the qualities of hard work, dedication, and reliability.  Each of the ponies has extra layers to them in various episodes (different facets of what makes up friendship), which makes them more than just pretty horsies (which is all I remember of the version from the 1980s).

The show focuses on the friendship and relationships between the various ponies (I guess unicorns, pegasi, and pegicorns are still ponies) and each show has a lesson to be learned: don’t judge people by the way they look, don’t be afraid to ask your friends for help, fair play in competition, etc.  There is an air of predictability to the episodes (which isn’t surprising, considering it’s designed for tween girls) but I can sense the writers having some more adult fun from time to time (in one episode, a miniature Applejack was referred to as “Appletini”).  The show is pretty funny and even the typical ditz character (Pinkie Pie) doesn’t bother me as much as the ditzy girl characters usually do.  She serves as great comic relief even in serious situations, which is what that type of girl should do! (You hear me, Looney Tunes Show writers!?)

The dialogue in the show is very clever.  I love how they “pony-ize” everything.  They don’t say “everybody,” it is “everypony.”  They use “on the other hoof” instead of “on the other hand.”  It really seems like the writers are very conscious of reminding us that, even though they are personified, these are still ponies and not humans.  It is quite a unique take since the ponies aren’t really fully anthropomorphized but are still easy to connect with as human-like. 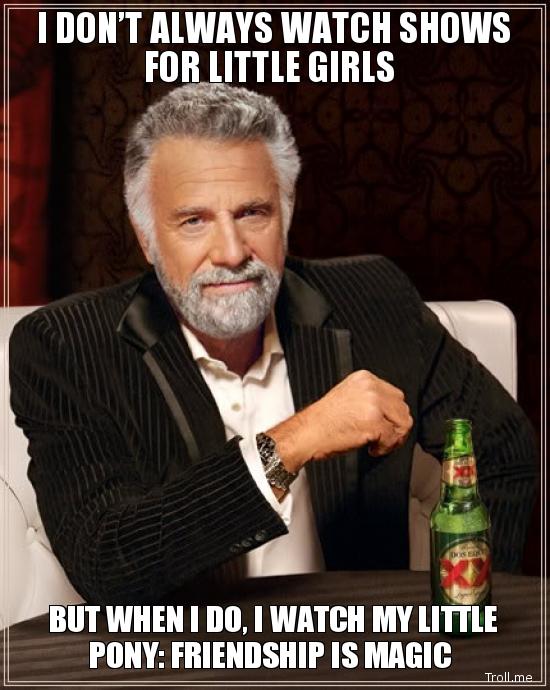 Overall, I think what sets My Little Pony: Friendship is Magic apart from the other shows designed for girls, though, is very simple: fantastic writing and well-defined characters.  Most little girl shows seem to be focused more on the merchandising associated with the show.  The cartoon itself usually just serves as a star vehicle for the toys, games, clothing, and other paraphernalia associated with the show.  The producers are typically low rate and not really interested in producing a quality show and more interested in putting something pink and frilly on TV to push the products associated with the show.  Pony is different and there is one person to thank for that: Lauren Faust.  For those who don’t know, Faust was one of the major brains behind another Cartoon Network show that was very well done: Foster’s Home for Imaginary Friends.

The end result question has to be this one: am I now amongst the ranks of the bronies?  Has watching 4-5 episodes of My Little Ponies: Friendship is Magic turned me into just another statistic?  Sorry if I disappoint, but no.

My apologies, The Most Interesting Man In The World, but I definitely don’t consider myself amongst the rank of 15-30 year old males that is a diehard fan.  I will acknowledge that the show is very, very well done.  The cast is phenomenal and the show is extremely well-written.  At the end of the day, though, it’s still a show for girls and as cute as it is, I still feel like it is not trying to speak to me and I don’t connect with it the way its target audience should.  Even though I don’t think I am a brony at this point, I still give the new iteration of My Little Pony 5/5 Giant Cartoon Mallets.  I am happy to see a well-done girl show that actually focuses on good writing and developed characters, even if they are ponies.