Odd and the Frost Giants by Neil Gaiman, Books for Boys Review 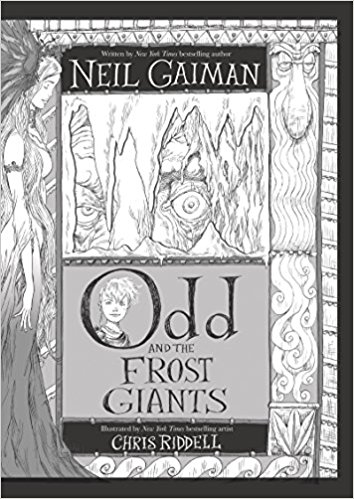 Written by New York Times bestselling author Neil Gaiman and illustrated by UK Laureate Chris Riddell, this new edition of the thrilling, wintry Nordic tale weaves a truly magical story of legend and adventure that will grip and enchant readers from beginning to end. This new edition is heavily illustrated and has an oversize trim, much like the New York Times bestselling The Sleeper and the Spindle.

Odd, a young Viking boy, is left fatherless following a raid, and in his icy, ancient world there is no mercy for an unlucky soul with a crushed foot and no one to protect him. Fleeing to the woods, Odd stumbles upon and releases a trapped bear…and then Odd’s destiny begins to change. The eagle, bear, and fox Odd encounters are Norse gods, trapped in animal form by the evil frost giant who has conquered Asgard, the city of the gods. Now our hero must reclaim Thor’s hammer, outwit the frost giants and release the gods…

First published in 2009, Odd and the Frost Giants has been reimagined by acclaimed artist Chris Riddell in the style of his epic black-and-white artwork from The Sleeper and the Spindle, enhanced here with metallic silver ink.

Well, first off I must admit that I am a huge fanboy for anything Neil Gaiman. That being said, this middle grade story falls into the category of must-read primer to Norse Mythology (in addition to, you know, Gaiman’s recently published collection of Norse stories). This one, however, is written with that middle grade audience in mind and does so wonderfully. It’s rare to get a “new” Norse Myth story but Gaimain does this with Odd. He uses the familiar framework (Loki does something to screw things up for everyone else) and creates an entirely new myth around Odd.

The story itself has an Aesop’s Fables feel to it with a familiar plot: magical animals appear to our would-be hero, who helps them even at risk to his own life. Of course, the animals turn out to be gods. In a very Viking way, however, Odd is rewarded not simply for his good heart, but for his bravery and cleverness in helping the gods take back Asgard from the Frost Giant that tricked Loki. Odd’s adventure with the gods is framed around a very nice story about a young boy losing his father and dealing with a disability, yet remaining positive and determined no matter what was placed in front of him.

It would be remiss to discuss this version of the book without giving credit to the amazing illustrations by Chris Riddell. In some cases, he was given a full two-page spread to work with and he did not disappoint. With his simple black and white drawings accented in silver (which is just gorgeous and found throughout), this is one of the prettiest books I’ve held in my hands in a while. Riddell’s art amplifies Gaiman’s story in a masterful way. Visions of the Norse gods as they are presented in actual Norse myth (not the Marvel comics version) are wonderful.

It’s a myth story, so normal myth stuff applies: temptation by beauty, death (but nothing cruel or gruesome), and hardships for our hero followed by rewards for his performance by the gods. There are clearly no language or content concerns across the board and the only real death is an “off-screen” death of Odd’s father by illness after nearly drowning in the frozen waters of the north.

The artwork is all G-rated and there is nothing to suggest that the youngest of readers couldn’t enjoy this story. It would make a great read out-loud story with its numerous large pictures and a strong reader as young as 8 could easily pick this up and run with it on their own. It is not watered/”dumbed” down for a young audience but is still more than accessible.