Note: I started this review approximately 2 years ago but never finished it. As I hope to get back into cartoon reviews (as well as my new book reviews!), I’ll start with finishing this.

It’s been quite a while since I last did a cartoon review, partially because I have not been doing much writing at all the last few years and partially because my family “cut the cord” about a year or so ago and don’t have cable anymore. The lack of passive TV watching has made it harder to keep up with new shows. That all being said, I have been inspired by a recent binge watching of a Cartoon Network show and wanted to review it for whatever audience I still have on this page. Today I review Steven Universe.

First and foremost, let’s just say that I very quickly became a fan of this show. The premise of the show immediately grabbed me from the very first episode. I love that the writers didn’t try to go with a big long origin story in order to introduce us to this world (which is, ostensibly, just our world plus gems). They threw us right in: Steven lives with three gem-women and is essentially raised by them. We immediately have to accept this without any initial backstory and I, personally, am a huge fan of this type of storytelling. Don’t tell me the world I’m in. Just throw me in there and let me figure it out along the way! 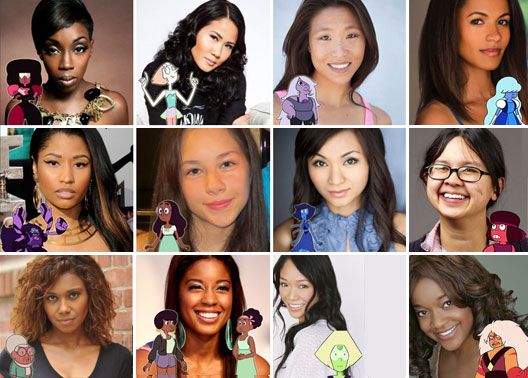 The voice cast for this show is pretty unique. The majority of the cast has no prior voice acting experience and were apparently selected for their stage/singing voices more than their acting (I 26remember reading that in an interview with Rebecca Sugar [the creator] somewhere but I can’t seem to find that interview now). The one exception to that seems to be Steven himself, Zach Callison, has developed a very unique singing and speaking style for Steven that wouldn’t be traditionally considered a “good singing voice” but it works for the character. The Crystal Gems had collectively more stage experience than voice-acting experience before this show: Estelle (Garnet) is a well-known British singer, Deedee Magno (Pearl) was part of national touring casts of Miss Saigon and Wicked, and Michaela Dietz (Amethyst) was mostly known for her work as Riff on Barney (yeah, the purple dinosaur show).

Collectively, the cast is delightful and, in a very happy note, one of the more diverse casts out there for animation. In what seems to be an intentional move, Cartoon Network took a show starring a white boy (and cast a white boy for the role) and put three minority women around him (Estelle is Black British, Magno is Filipino-American, and Dietz is Korean-American). It is nice to actually have women (and minority women at that) voicing female characters (I’m looking at you, Bob’s Burgers) that are themselves very unique and diverse. And their experience as singers is used very regularly with numerous musical numbers throughout the series. 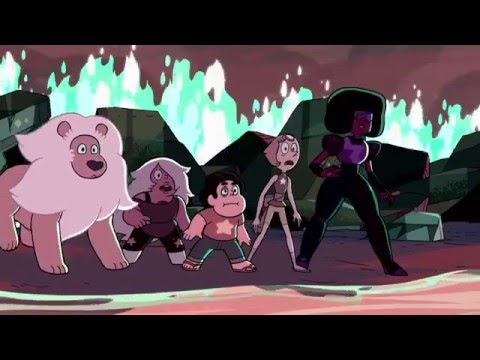 As for the actual show itself, it is one of the best I’ve watched in a long time and the first time I really got into a Cartoon Network show since Adventure TIme/Regular Show (two shows I reviewed back in 2011 on the blog). On its surface, the show is a quick-hit adventure story with splashes of humor added. Underneath, it’s a touching story that hits sweet notes ranging from LGBT acceptance, parental sacrifice, and immigrants adopting a new environment and calling it home. You don’t need to see or even care about the deeper meanings to enjoy the show; it is perfectly good just to enjoy the lovable, doofusy Steven bumbling his way through life with nothing but positive vibes and love in his heart.

If you find the show a slow starter, I tell you to stick with it. If you don’t fall in love with everything the Steven Universe team is doing by the time you hit the episode “Jail Break” then I’ll eat my left shoe (this episode also features my favorite song of the series, Garnet’s “Stronger Than You”). I give this show a hearty 5/5 giant cartoon mallets and look forward to every episode with glee.