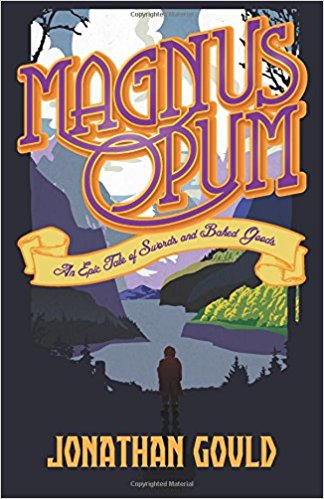 An epic tale of swords and baked goods.

Magnus Mandalora never planned to go out into the big, wide world. He thought he’d live out his life in his homely little village, happily cooking and eating pflugberry pies. But fate had other ideas.

Before he knows it, Magnus has embarked on an incredible adventure. He discovers a world full of marvels and wonder, surprises and delights. But it’s also a world of perils and danger. As Magnus finds himself right in the middle of a long-running war between the fair and noble Cherines and the vile and despicable Glurgs, he faces challenges beyond anything he could have imagined.

The story begins Tolkien-ish enough: an adventure-seeking member of a comfortable diminutive race (Magnus Mandalora of the Kertoobis) ventures outside of his happy, comfort zone on a quest to follow in his brother’s footsteps. The parallels to Lord of the Rings and other epic fantasies are also found in the two main races he deals with: the wise and beautiful Cherines (elves?) and the grotesque and barbaric Glurgs (orcs?).

However, like any truly great parody work, Gould also brings his own staggering imagination into the fray. This is where his master satirical pen steps in and elevates Magnus Opum from mere genre mimicry to a wonderful piece of original art. Through Magnus’s journey, we learn lessons on the absurdity of materialism (blasted Plergle-Brots), gossip & the hidden truths in rumors (never trust a Doosie), and the problems that a simple misunderstanding of cultural differences can cause. Gould tells the story in such a silly and playful way, it’s easy to ignore his deeper lessons and just enjoy the cartoonish (at times) storytelling.

The world of Magnus Opum is so amazingly other with its odd creatures, customs, and naming conventions (hence the comparisons to Seuss’s whimsical worlds). At the same time, Jonathan Gould is skilled enough to show parallels to our own culture and customs that we can enjoy Magnus’s story as an outsider, but still see the absurdity present in our own societies.

Jonathan Gould describes his first full-length novel as “Tolkien meets Dr. Seuss.” While, on the surface, this is a completely accurate way to prepare someone to read his wonderful epic comedic fantasy, it does not fully do the work justice. When I first started reading it, I agreed that it felt like The Hobbit recast in Whoville.

Having previously read Gould’s first two pieces (the satiric novellas Doodling and Flidderbugs), though, I was prepared to look into Magnus Opum with a deeper perception. What I found was that Gould’s brilliant satiric mind found a way to send us messages even if it was obscured in a larger work of parody such as this.

At the end of the day, the story of Magnus Mandalora of the small homely village of Lower Kertoob is fun, funny, educational, and a master work of both parody AND satire rolled into an easy-to-read family-friendly story. This is one of those stories that a twelve year old could read and enjoy but that a teen to adult would read and be able to appreciate the layers and depth of the satire.