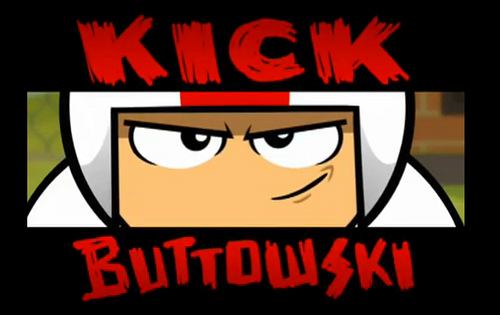 My initial feel for this show was not a positive one.  The name of the show itself screams, “Look at me because I made a funny word that sounds like a bad word!”  To find out that this is actually the name of the title character does not help any.  The basic concept of the show is that Kick is a 12-year old kid who wants to be a daredevil, Evil Knievel style.  Apparently, the original title of the show was Kid Knievel but they decided to go with Kick Buttowski instead.  I think neither of the names are that great.

I found in preparing for this show that it was actually nominated for several Daytime Emmies.  One of which was for casting, so let’s explore this cast.  Charlie Schlatter voices Kick, and the tough-guy Clint Eastwood style is actually pretty ironic for a 12-year old.  It gets a little annoying after a while, though.  Matt L. Jones voices the obligatory fat-kid sidekick, Gunther.  The rest of the cast is a mix of some voice-acting mainstays such as Danny Cooksey (Brad), John DiMaggio (Mr. Vickle), and Kari Wahlgren (Mom) as well as some of Disney’s regular throw-ins like Brian Stepanak (Harold) and Emily Osment (Kendall).  I’m really not sure it’s an Emmy-worthy cast, but it isn’t horrible.

The show itself is a little annoying to watch, especially in the world of prominent flash animation on the Internet.  Creator Sandro Corsaro is known for his preference for Flash and the show definitely feels like it was drawn in Flash.  It might be unique in a way for usage in a mainstream show, but it feels a little amateurish to me.  This, though, is coming from a non-artist/non-animator, but that’s why I usually don’t critique animation. 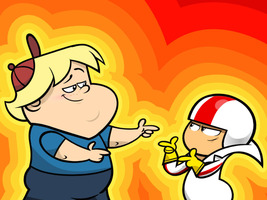 Look, we're total opposites. Are we funny yet? No, not really.

The main two characters of Kick and Gunther are your prototypical polar opposites.  Kick is a thrill-seeker.  Gunther is a worry-wart.  Kick is super-focused.  Gunther probably has ADD.  Kick is confident.  Gunther is a wimp.  Yeah, we get it… they are tween boy versions of Bosom Buddies.  Unfortunately, they really aren’t funny as a pair.  The rest of the characters don’t bring a lot to the table.  Brad is the bully older brother.  The dad is a neurotic lame dad (basically the same dad from Johnny Test, Jimmy Neutron, and numerous other shows) and the mother is nice and has secret coolness to her as a former daredevil (like the mom in Phineas and Ferb with her music past).

Overall, the show is not all that hot.  Just like any Western animation, it relies on slapstick and visual gags to make up for the lack of a real story.  They throw in backstory information sometimes just for kicks or because one of the writers threw out an idea that seemed viable.  It definitely has an air of ‘figuring it out as we go’… another staple of Western animation.  It isn’t necessarily a bad thing, but it definitely explains why so many of the characters have no real depth.  I’ll give Kick Buttowski: Suburban Commando 2/5 Giant Cartoon Mallets, because it isn’t completely unwatchable… just mostly.