Pavarti K Tyler is an artist, wife, mother and number-cruncher and has been committed to causing trouble since her first moment on this Earth. Her eclectic career has flirted with Broadway, Teaching, Law Firms and the IRS. Currently she is hard at work establishing her Indie Publishing Company Fighting Monkey Press.

Saturday mornings were sacred when I was a child. Like most of us of a particular age I was the child of divorced parents. My mother worked as an ER Nurse from when she dropped me off at school on Fridays until Monday when I got home. Weekends were spent with my Aunt and Uncle and my teenage cousins. This pattern started when I was seven. And I loved television.

Television offered an escape from reality. I could read and loved to read, but at that age it was still work. Even now, stories are my balm. To get lost in a good story is something I savor. During those years on Saturday morning I was allowed to revel in the glory of cartoons. I would wake up by my internal clock between 5:30 and 6. Garfield came on at 6AM so I was sure to be up. I’d pour myself a large glass of Orange Juice, grab a spoon and the jar of Skippy Peanut Butter and enjoy at least three hours of uninterrupted television. I knew the schedule of shows by heart, knew which channels had the good shows on at what times and had my own subplots running in my mind as I watched.

As I got older the cartoons seemed to get stupider. Or I got jaded, as tweens are like to do. At some point I left cartoons behind for the fabulousness of 21 Jump Street and 90210. The essence of what I loved – a story that spoke to me – didn’t change. But the format did. I could no longer relate to cartoons. They didn’t connect to my life or the kinds of things I was thinking about. And the Sally Forth “adult” cartoons were still indecipherable. To be honest, they still are.

It was around the time I discovered The SandMan Graphic Novels and The Tick that Gargoyles began airing: and I was in love.  If you’ve been following along here you’ll know that yes, I was a sophomore in high school.  Yes that’s a little old for Saturday morning cartoons.  And no I don’t care.

Gargoyles had everything in it I wanted.  It had a dark theme, mystery, silliness, a strong female character that didn’t need to be saved every god-damn episode and an innocence I still longed for.

More important than anything else though, Gargoyles had Goliath. 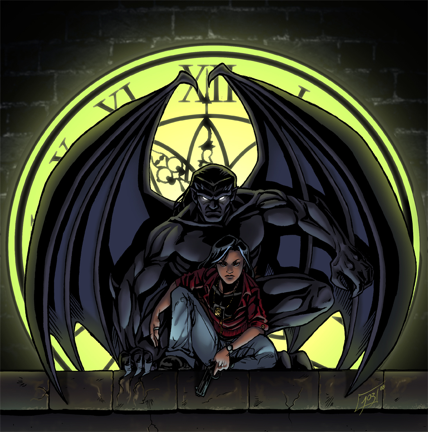 That’s right, laugh away, but I’m here admitting publically that I was fifteen years old with a giant crush on a cartoon character.  But you’ve probably had one too; I’m just man enough to admit it.

As an aside, please note the Angel-like protrusions on Goliath’s forehead. Is it any wonder I’m madly in love with David Boreanez as well?

Gargoyles was heavy on plot, thick with mythos and super fun.  The basic premise was that back in the 900s or so Gargoyles and Humans co-existed, albeit tensely.  The Gargoyles are betrayed and frozen in stone until a billionaire (the archetypical antagonist David Xanatos) reassembles their original castle in New York City.  The clan is reawaked into modern times and has to figure out how to survive in this new world.  They make friends with the shockingly self-sufficient NYPD offices Elisa Maza and help save New York and humanity time and again.

Delightfully, Gargoyles did not lack in sexual innuendo, tension or dark themes.  This is probably why it only lasted two seasons and while it’s cult following was huge, its commercial success limited.  I have to admit, I think twice about whether my 6 year old should watch it or not (in the end I let her, I mean, let’s be honest, if she has me for a mother she’s already used to dark themes and sexual innuendo).  But the show was always fun.  It was riddled with distinct voices (especially drawing from Star Trek Alum for some reason) making it always fun to play “Guess that Actor” and the balance between the silliness you need for levity and seriousness you need for plot was always teetering, but never pushed too far.  It was the Weebles of television: It wobbled but it never fell down.

Every week there was a new supernatural threat, a new clan re-awakened, a long lost love or child, a robot, a madman, or a confusing romp in central park. The characters were rich but formulaic enough that they were comforting, as cartoons should be.  But in every episode the theme that came through was the relationship between Elisa and Goliath.  They managed to overcome misunderstanding by Talking To Each Other and reconcile their differences by Listening.  All shocking and provocative concepts I know.  But in a world where everyone seems so eager to fight, it is nice to see two characters, so different find common ground. 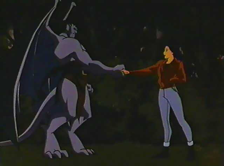 And believe me, the fact that one of those characters was a smart, strong, capable woman who was valued for her intelligence was a huge draw.  We don’t get many of those, especially in Saturday Morning cartoons.  Elisa wasn’t perfect, but Goliath sought her advice.  He needed her to balance out his weaknesses.  As a team they were stronger than they were alone.  Huh… wonder if there’s something we should learn from that!?!

The point driven home over and over, in sometimes surprising and sometimes sledgehammer, vomit inducing ways was that no matter how different these two were, by working together and respecting each other they could accomplish amazing things.  Goliath and Elisa should give a seminar.  They could call it “Different Species, Same Mission” and they could invite the Palestinians and Israeli’s; Blacks and Whites, Michelle Bachman and sane people!  What a difference they could make!

So when all you want to do is spit on the asshole sitting in the cubicle next to you who keeps stealing your red stapler, please, please, take a moment and think to yourself: What Would Goliath Do?