I am heading back to Nickelodeon this week for my Saturday Morning Cartoon Review.  Now that one season is under wraps and they have renewed it for a second, I feel like I can review one of the few new cartoons even on Nickelodeon that isn’t under the sea.  This week’s review is T.U.F.F. Puppy. 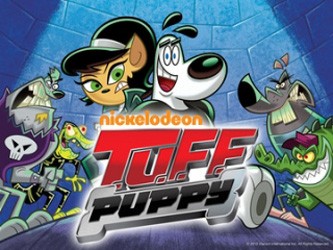 First, I’m going to start by pointing out how annoying it is that this show actually places the periods in the acronym T.U.F.F.  I’ve already typed it twice and it’s bothering me.  Why would they do that?  As if people weren’t going to understand that TUFF was an acronym to begin with?  Well, let’s get to the review of one of Nick’s few cartoon properties that is actually producing new stuff on a regular basis.

The voice acting is great, with one glaring exception: the main character, Dudley.  I love Jerry Trainor on iCarly as Spencer, but he is one of those examples of actors who just use the same voice in voice work as they do for live action.  This is fine if your name is Patrick Warburton or Adam West.  However, this does not work for most actors.  It is a real shame, too, because the rest of the cast is rounded out by some voice-acting superstars: Grey DeLisle (Kitty), Jeff Bennett (Keswick and several of the bad guys), and Daran Norris (The Chief and others).  Keswick’s voice is the annoyingly overused Jerry Lewis Nutty Professor character voice.  That is no knock on Bennett’s ability–he does the voice well.  I just think that particular voice needs to be retired from the world. 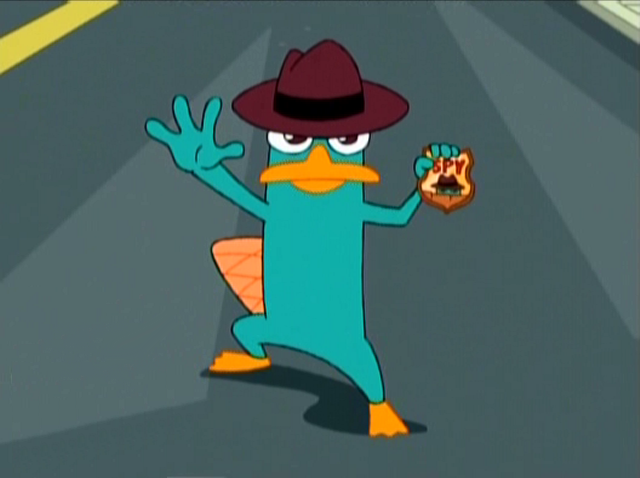 Sorry Dudley, but you're no Perry the Platypus.

The show itself has a very simple premise.  Idiotic hero character (Dudley) defeats idiotic villain character (Snaptrap) in strange ways, using the various natural dog (and apparently, billy goat) abilities ingrained in his mutt DNA.  In an Inspector Gadget-like way, Dudley is often helped by Kitty and Keswick but gets the credit in the end for foiling Snaptrap’s “evil” schemes, which are sometimes no more than just slightly naughty.  The whole concept of the show reminds me of the Perry versus Doofenshmirtz segments in Phineas & Ferb.  The problem, though, is that Disney is already doing it–and doing it much better.  On top of that, the Perry portions wouldn’t work as a stand-alone episode and neither really does T.U.F.F. Puppy.

I really wanted to like this show because I’m a Nicktoons fanboy, most of the time.  Unfortunately, though, there are really no original redeeming qualities to this particular cartoon.  The characters are all flat, stock characters with no real new wrinkles to make them interesting.  Dudley is the bumbling hero (erm, Dudley Do-Right anyone [IT’S THE SAME NAME!]?  Inspector Gadget?).  Kitty is the tough, smart girl.  The Chief is… a chief.  Keswick’s a nerdy professor.  Snaptrap is a bumbling villain.  Snaptrap’s gang is a group of replaceable underlings.

I’m not going to say that some of the visual gags don’t make me chuckle here and there, but I am surprised that the show even got picked up for another season.  Maybe I’m over-analyzing the derivative nature of the show or maybe I’ve just watched way too many cartoons that I even see how derivative it is.  The show isn’t completely unwatchable and the rest of the cast does a good job picking up some of Trainor’s shortcomings as a voice actor, so I’ll give T.U.F.F. Puppy 2/5 giant cartoon mallets for the few chuckles I do get from watching it.