Based within the walls of the Fortress of Solitude, studying the ways of the Unknowable, Phoenix writes…  http://bit.ly/otTvOS

The year: 1994. From out of space comes a runaway planet, hurtling between the Earth and the Moon, unleashing cosmic destruction! Man’s civilization is cast in ruin!

Two thousand years later, Earth is reborn…
A strange new world rises from the old: a world of savagery, super science, and sorcery. But one man bursts his bonds to fight for justice! With his companions Ookla the Mok and Princess Ariel, he pits his strength, his courage, and his fabulous Sunsword against the forces of evil.
He is Thundarr, the Barbarian! 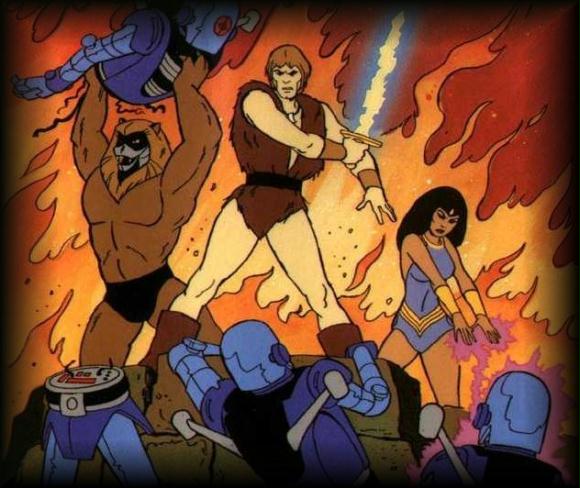 Way back from 1980-1982, this was the vision of an apocalyptic future we were given to look forward to, not that vague 2012 doomsday stuff we’re being hammered with now. Thirty years ago, our Saturday mornings gave us a specific vision of things to come through one of the coolest action-adventure cartoon series ever to grace the network television airwaves. To let you know where I’ve been on the cartoon issue, I’ve always been in favor of them, maintaining as an adult that they’re an important part of our culture and good health.

My childhood Saturday mornings were full of Looney Toons, Super Friends and meddling kids. To me, outdoor life on a Saturday didn’t exist until after noon and my parents were typically willing not to push the issue as long as I let them sleep as long as they needed. These days, I’m up on Saturdays before my own kids and feel sorry for them because most of the cartoons of their youth pale in comparison to the ones in my memory. Through my whole life, Thundarr the Barbarian still stands as one of the most outstanding cartoons ever to urge me out of bed.

My first breakfast with Thundarr came on the morning of October 11, 1980. ABC aired “The Secret of the Black Pearl” and I could tell they had a winner. Sure, they had to stick to the basics of American cartoons: mild violence (bloodless roughhousing no matter how deadly a character’s resources) and no images or concepts that might be deemed too disturbing. Still, the product delivered some great work within those limits.

I remember not only the fun of watching Thundarr the Barbarian for its rousing first season, but also an even better second season. By the time the second season premiere aired, I was eagerly awaiting the return of my old friends Thundarr, equipped with his wry wit and Sunsword; Ariel, apparently one of the world’s only magic-users who hadn’t let it go to her head and become a complete jerk; and Ookla, superhumanly strong and possibly the Hulk’s anger management coach in a former life.

Thundarr’s world was constructed by some of the most talented and prolific writers in comic book history. The main characters were designed by Space Ghost creator, writer and artist Alex Toth. When he couldn’t continue on the series, they snagged Jack “The King” Kirby to carry the torch. With a start like that, how could quality output be far behind? For 21 half-hour episodes they threw us into a ravaged Earth of struggling humans, fighting to rebuild the remnants of our own shattered civilization (many elements of which had fallen into legend and amusing misinterpretation). Where’s the fun in that? Trust me, it wasn’t “Thundarr’s Extreme Village Makeover” playing cleanup according to 2000-year-old textbook scraps. 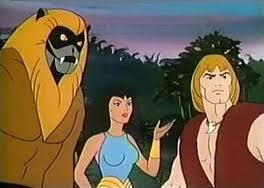 Beneath the light of the broken moon, our intrepid heroes were out to free mankind from the oppressive boots of weird, megalomaniacal wizards and their endless array of mutant minions. Some of those power-mad bastards weren’t even content with licking their wounds in quiet oblivion after having been soundly trounced, but had the nerve to reappear with new plans and a grudge. Yes, crazed magic-users with delusions of grandeur (it’s not hard to have a god complex when you’re an awesomely powerful member of the elite Council of Wizards looking down on the starving and pathetic masses) don’t like being defeated by illiterate muscle-men, their wise-cracking sorceress sidekicks nor their club-wielding, arrow-shooting walking carpet sidekicks.

I’ve been able to enjoy a variety of animations and this one was a rarity that brought science fiction, fantasy and action all under one roof. One of the most pleasing aspects of this outstanding bit of entertainment had to be that it didn’t insult the intelligence of the audience. Whether the heroes were liberating the jungles of Manhattan or battling in the desert of St. Louis, they did it with a well-written script that offered smart content fit for any age and set to a stirring soundtrack. Devoid of cutesy themes and attempts at elementary education, anyone seeking infantile pabulum or mindless slapstick needed to seek it elsewhere.

Thundarr the Barbarian will live on in subtle pop-culture references slipped into the occasional song or witty cartoon, on DVD of course and, most importantly, in the hearts and minds of its fans.