Calophi is an avid knitter and crocheter and hopes to eventually have enough skill and time to write and sell patterns. For now, you can follow her project progress and look at some free patterns (such as the Piranha Plant Scarf or the Luna Lovegood Scarf) over at her blog, Rip It Good. To keep up with blog updates, you can also follow the blog’s Facebook or Twitter account. 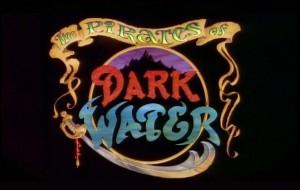 During a time when the reigning cartoons were Tiny Toon Adventures, Rugrats, and Ren and Stimpy, The Pirates of Dark Water was surely ahead of its time. Not to say that the other cartoons were bad – it’s just that they weren’t story-driven. They were episodic and focused on humor for entertainment rather than telling a story. 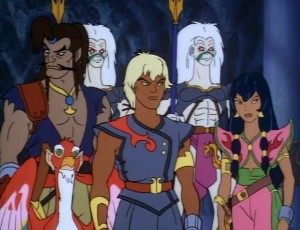 Pirates of Dark Water was made by Hanna-Barbara in 1991. It was meant to be a more serious show and was animated as such. It had complex and colorful backgrounds and a lot more movement than cartoons in the 80s. Sadly, the expensive animation coupled with Hanna Barbara’s acquisition by Turner are what eventually got the show canceled before the story was over.

I guess you guys might need to know what this show is about, eh?

Ren rescues an old man, shipwrecked in a storm, who cryptically tells Ren that saving the city of Octopon is his destiny and to seek Alomar. Then he dies and is swept out to sea. 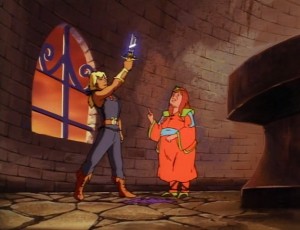 Leothas would love this guy, what with the intuitive posing and all.

Ren’s caretaker informs him that the man was King Primus and was Ren’s father. She gives him a sword which he holds up in a typically heroic pose (and atypically not questioning why he was given a broken sword like other jackass heroes would do).

He is then whisked away by a monkeybird (because any story-driven show needs an animal mascot), is plopped on a pirate ship crewed by his father’s former kidnapper (the pirate Bloth), escapes from them with the help of the same monkeybird, and seeks out Alomar.

Ren’s father has hidden the 13 Treasures of Rule to keep them out of enemy hands and died while never revealing the treasures whereabouts. Ren is given a special compass to help him seek out the treasures because “dark water,” which is all gross and evil and such, is taking over the realm and the treasures are needed to help save the kingdom. Ren manages to get a crew motley together (in a pub with background music that sounds suspiciously like Cantina Band), and the adventure begins! 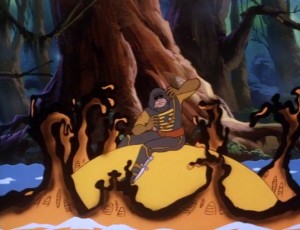 Oh noes dark water! But it's okay because this is a bad guy.

Now that I’ve re-watched this 20 years after I first saw it (man, that sentence made me feel old), I’m actually a bit amused at all the little tropes and quirks that I missed the first time though, like that pseudo-cantina-band playing in the pub. It still had little side-quests in each episode, but they usually were a part of the big picture somehow. And I really appreciate the fact that Niddler, the monkeybird, is actually a snarky, fun character instead of just being an annoying mascot.  At least, he starts out that way for the first 5 episodes, but then they make him a less serious character later.

It was so refreshing at the time to watch a show that had a clear beginning and end, which is why it’s so frustrating that it never got a chance to end, and no scripts were ever released. It isn’t like it was a slow-moving show, and it probably could have ended in another 13 or 14 episodes. I’ve seen comments that Titan AE is similar enough to Pirates of Dark Water that it can be taken as David Kirschner’s way of ending the series (he created both), but personally, I’d like to see something official someday. And having never seen Titan AE, I have no idea if it’s actually similar.

You can find out more about The Pirates of Dark Water, such as comics based on the show, ROMS for the video games that were released, and information about the RPG, over at PiratesOfDarkwater.net. This series has a TV Tropes page you can explore as well. The DVDs are only purchasable on WBshop.com, where they are made to order (and not remastered, though the quality isn’t bad).