Shells is a screenwriter who has written several shorts and currently working on a feature script. She watches cartoons of every sort and enjoys explaining ones that are new to her own two daughters who thrilled to see the shows she once enjoyed. Shells can be contacted at her website here: http://smashingsitings.blogspot.com/

The 80’s were known for music and music videos. There was one cartoon that depicted both. It was called Jem and the Holograms. It ran for three years from 1985-1988. 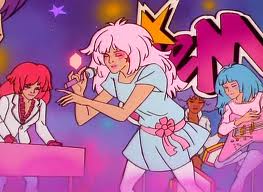 The story is about a music company named Starlight Music owned by Jessica Benton. However, Jessica has a secret. The one big musical act she has under her company’s wings, Jem and the Holograms, has a more personal note than one would think. Due to Synergy, a holographic program she owns, she can transform herself into Jem, the leader of the band Jem and the Holograms. The only ones who know about Jessica’s alternate persona is the band. Her boyfriend Rio doesn’t even know and neither do The Misfits, the rival band that always causes trouble for Jem and the Holograms.

Each episode has Jem and the Holograms dealing with some crisis, whether it is trying to get money for a charity, trying to help a friend of a band mate’s problem, or trying to compete for a musical title. There are also mini videos of songs that the band performs integrated into the story line in one way or another. Sometimes it is their band or sometimes it is The Misfits who have the mini song and video. 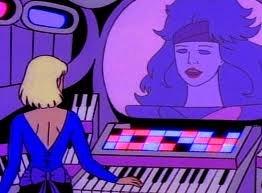 The enjoyable part of the show was the mini videos they had in each episode. Given it was the time of music videos coming about with the creation of MTV back in the early 80’s, so this idea was a bit new, but putting into a cartoon was different and made it more fun to watch. What many people didn’t know was that the singing part of Jem and the speaking part were done by two different people. It was hardly recognizable in the episodes as they messed the two together so well.

The styles of the characters were certainly 80’s. They wore the bright colors, hair was all over the place and the sound of the music certainly fit the time period. And with a lot of cartoons, the image of the bands never changed showing what they considered the good versus the bad. For example, The Misfits, their rival band showed the more extreme side of the music at the time with their colors more bold and their hair more brightly colored, showing the more rebel side of the music industry labeling them as the ones who always did things the wrong way.

The downside of the cartoon is at times the characters were a bit one dimensional. As with a lot of cartoons, things were made simple to understand and characters would go about with their dramas and conflicts in an easy to move fashion. At times, it can become a groaning experience as you watch and see one character such as Kimber, Jessica’s sister and Jem’s band mate, constantly not be happy about one thing or another. 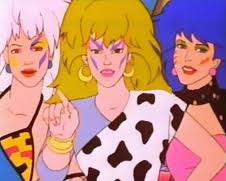 Jem and the Holograms brings a cartoon mixed with a simple storyline and music. Given when girls were young back in the 80’s, there wasn’t many cartoons there that had lead female characters they could have as a role model. Jem and Jessica Benton provided a somewhat situation in each episode to teach the kids about some kind of lesson. Granted, not many bands would have a holographic program to help change their look, but regardless, this cartoon brought the flavor or music and fun to its audience.

Now being shown again on the Hub network, kids of a new generation can experience the music and fun of these rocking characters.