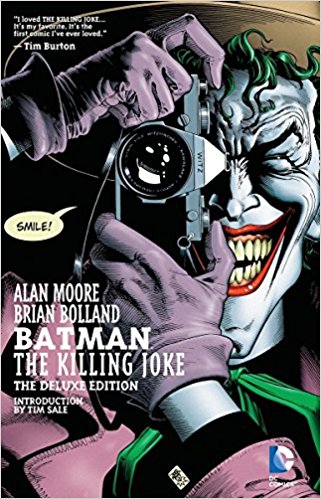 Presented for the first time with stark, stunning new coloring by Bolland, BATMAN: THE KILLING JOKE is Alan Moore’s unforgettable meditation on the razor-thin line between sanity and insanity, heroism and villainy, comedy and tragedy.

According to the grinning engine of madness and mayhem known as The Joker, that’s all that separates the sane from the psychotic. Freed once again from the confines of Arkham Asylum, he’s out to prove his deranged point. And he’s going to use Gotham City’s top cop, Commissioner Jim Gordon, and his brilliant and beautiful daughter Barbara to do it.

Now Batman must race to stop his archnemesis before his reign of terror claims two of the Dark Knight’s closest friends. Can he finally put an end to the cycle of bloodlust and lunacy that links these two iconic foes before it leads to its fatal conclusion? And as the horrifying origin of the Clown Prince of Crime is finally revealed, will the thin line that separates Batman’s nobility and The Joker’s insanity snap once and for all?

Legendary writer Alan Moore redefined the super-hero with WATCHMEN and V FOR VENDETTA. In BATMAN: THE KILLING JOKE, he takes on the origin of comics’ greatest super-villain, The Joker —and changes Batman’s world forever.

Stunningly illustrated, BATMAN: THE KILLING JOKE, THE DELUXE EDITION has been lushly re-colored by artist Brian Bolland, presenting his original vision of this modern classic for the first time.

I must start with an important caveat: I had never read this story (nor watched the recent film version) before a few months ago. Growing up, I was always more Marvel than DC so I missed this one when it was relevant and shocking in the late 80s/early 90s when it released (plus I was only 6 when it first was published, so there’s that). This review is from the POV of a 35 year old geek who read it for the first time in 2017. I think that’s important to note.

Why would boys like it? Well, it’s Batman and Joker. Not only Batman and Joker, but what is widely considered one of the most pre-eminent stories in the Batman mythos. The “origin” of Joker? What could drive a man to be as purely insane as Joker has been and is? Well, we get a glimpse of it… kinda. There are debates as to how much Joker’s identity represented in The Killing Joke is “canon” (meaning, true to the core history/legacy of the character and the underlying world) so we still really don’t know “officially” if this is how Joker became Joker (before he became Joker, you know what I’m saying?). Look, comic book canon is a confusing wormhole you just don’t wanna go down. Believe me.

Canon or not, the play on the concept of “one bad day” being all it takes to break a man is a wonderful concept, however. In a similar vein as David Fincher’s classic (oh gods, something released in 1995 is considered a classic now) thriller Seven, the ultimate point the villain is trying to prove is that with enough stresses/pressure points hit, even a “good” man can snap.  This was Moore’s greatest feat and something that has lasted well into modern day adaptations of Batman/Joker: that the two of them are way more similar than they seem on the surface and one of them broke while the other didn’t.

The actual story is simple: Joker wants to put his enemies (first Commissioner Gordon, then Batman) through enough stress to show that they’ll break and that “good” and “evil” are relative concepts depending upon the situation. I think at the time it was published it would have been more shocking than reading it 30 years later when way more has been done with these and other comic characters. In between, we get some background on just how Joker broke and became the insane man he is today.

The art is wonderful and the cat & mouse game is classic Batman/Joker interaction with, obviously, Batman coming out on top. It ends with some ambiguity as to whether or not Batman has really finally ended the continuous circle by finishing off Joker once and for all (but again, since it isn’t really canon it doesn’t matter… it’s more of a “what if” scenario).

I enjoyed it and I think I would have rated it 5-stars when I was younger but look at it as more of a 4-star story at this point. It’s still wonderful but not that over-the-top fantastic wonder when you’re done reading that makes you think it can’t get any better than this. And that may just be my age/experience talking and not any detriment to the work itself.

This is one of the darker applications of what can be done in a comic. The shooting and paralysis of Barbara Gordon is considered one of the “worst” things done “on-screen” in a comic from one of the big publishers (especially in a Batman story). Further, there are images of Barbara that Joker showed Commissioner Gordon with her nude and bleeding (no nudity visible in what we see other than her butt) that are meant to break Gordon (and nearly do) into madness. They might be disturbing images for a younger reader (especially thinking of this book being published in 1988).

It’s most definitely not for young readers and I’d say into solid high school and up category (kinda like darker/more violent comic characters like Deadpool or Punisher). But I wouldn’t shy away from a mature middle schooler being able to read it so long as the parent is okay with darker themes, some blood, and a girl’s butt.