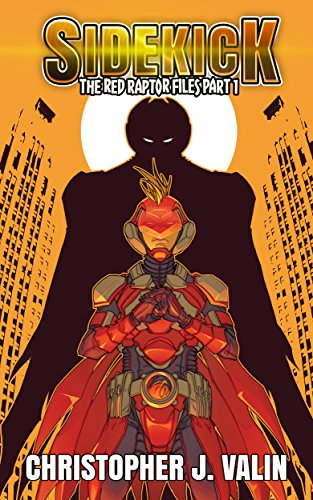 THE CITY’S GREATEST HERO HAS DISAPPEARED and it’s up to his teenage sidekick to find him.

But Red Raptor isn’t prepared for the challenges he must face when he has to go up against their most dangerous foe without his partner.

Sawyer was starting to get a little bored being Red Raptor, the sidekick of The Black Harrier. Since his power allows him to copy anything he watches, he’s followed his partner into numerous battles and come through virtually unscathed. In fact, his problems living at home with an alcoholic single mom and being bullied at school are worse than anything he’s faced as a crime fighter.

And then there’s this girl…

For the first time in his life, Red Raptor is forced to test the limits of his abilities and come to grips with what it means to be a hero.

I must say off the bat, the only reason I took off a star for this from a 5-star rating is that it felt way too overtly a Batman & Robin fanfiction, albeit from Robin’s perspective. From the Black Harrier’s character (both the superhero and the alter ego billionaire playboy), the fact that Sawyer is the third Red Kite (or, Raptor) putting him in the Tim Drake position of Robins (the first being Dick Grayson, who comes back as Nightwing… or Redhawk in this story). Even the two biggest bads, Pierrot (killer clown – Joker) and Deadeye (sharpshooter assassin – Deadshot) feel they are fanfic variants of DC villains. The plot itself felt eerily reminiscent of The Killing Joke, Alan Moore’s famous Joker-tries-to-destroy-the-Batman-psychologically graphic novel.

Now, all that being said, the story is no less enjoyable or well written even if it is very obviously (and perhaps intentionally by the author) borrowing a lot of facets from the Batman mythos. To be fair, it’s kind of hard to write any type of “comic book” story without seeing pieces from formerly published material. So unless you’re going obvious parody (think of the Big Daddy character in Kick-Ass), there will be familiar elements.

A story being told in first person present tense is USUALLY something that bothers me. In this type of fast-paced comic book story with a lot of fight scenes and action, it really helped keep the pace moving and I blew through the story fairly quickly. Valin moves us through the plot rapidly and doesn’t waste a whole lot of time with setting scenes and such (again, this is a positive thing in this story, we wanna get to the next fight/twist/plot point).

All in all, it was a super fast read and I definitely hope that after this first book Valin tries to spin away from the obvious Batman influence and into some of his own unique spin on things. Sawyer is a great POV character and the “big twist” at the end was kind of unexpected (I don’t know if I missed some foreshadowing or if he truly intended it to be a no-warning twist) but it didn’t feel out of place. It closed out this first book on a nice note and does make me interested in seeing where the heroes go from here.

Your typical comic book fare, for the most part. Sawyer is a teen boy so there is the “paying attention to girls” aspect but nothing really overtly sexual other than some minor innuendo. The violence is predominantly comic booky in nature with a few “on screen” deaths with description, but not majorly gory. There is no major language concerns outside of what one would here from a typical comic book movie or TV show. Overall, very appropriate suited for the pre-teen/teen crowd along with most of your mainstream comic books/shows/films.