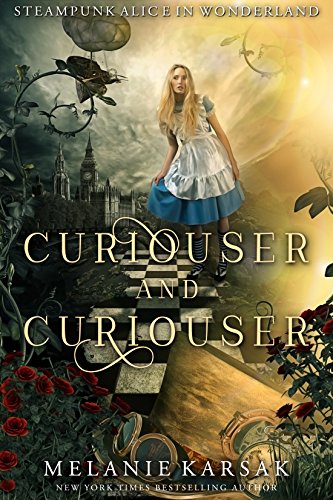 To save the Hatter, Alice must bargain with the one man she despises so much that she might still love him.

Alice thought she’d turned over a new leaf. No more working for Jabberwocky. No more making deals with the ruthless Queen of Hearts. No more hanging around The Mushroom with tinkers, tarts, scoundrels, and thieves in London’s criminal underbelly. But she’d been bonkers to dream.

Hatter’s reckless behavior leads Alice back to the one person she never wanted to see again, Caterpillar. Pulled into Caterpillar’s mad schemes, Alice must steal a very big diamond from a very royal lady. The heist is no problem for this Bandersnatch. But protecting her heart from the man she once loved? Impossible.

I have generally avoided “fairy tale retellings” even though they are a very popular “genre” right now. Mostly because I feared that by doing a “retelling”, the author is limiting themselves to existing lore and even potential outcomes in a Rosencrantz & Guildenstern Are Dead existential way. I am delighted to say that this book has proven me completely wrong and has opened the doors for me to explore more stories in this format.

Karsak has taken perhaps my most beloved “fairy tale”, Alice’s Adventures in Wonderland, and completely flipped it into something fantastically new yet, somehow, very familiar. Use of well-known phrases (“why is a raven like a writing desk?”, “we’re all mad here”, etc.) keeps bringing us back to remember that this is, in fact, an Alice retelling. Between that and the clever naming convention of using the character names from the original as “code names” for a criminal underworld (Alice is Bandersnatch, William is Caterpillar, etc.) adds a level of realness and believablilty to an otherwise fantastical story.

Alice is a perfect story for the steampunk spin the author puts on her series of Steampunk Fairy Tales (and I do plan on checking out the others she has and more when she writes them), considering the formality and courtesy of Victorian England that already wove throughout the original story (remember Caterpillar’s lessons she had to recite in the Disney film?). Replace playing card guards with automatons and steampunk cyborgs, a subtle nod to the Cheshire Cat in the form of a clockwork cat pet, and sprinklings of updated references here and there and you have a fitting story that even the ORIGINAL Alice would seem to fit in (minus the occasional scene of exsanguination but still with the occasional beheading) and you end up with a creepy yet delightful story.

I really, really enjoyed this story. And I’m not just saying this as a grown man with a tattoo of Alice, Chesh, and Caterpillar on my arm… (although, maybe that helped me pick up this story in the first place).

Well, let me say right off the bat that this is easily a 15+ title. And even then, it gets a bit creepy and murky. There are no overt sexual scenes (although mentions of “tarts” being naked and a really creepy scene with a naked Queen of Hearts are in here), minimal language, and even the gore isn’t all that explicit. However. It is most definitely a more “adult” telling of the Alice in Wonderland story and should be treated as such. A mature high-schooler who has some experience with R (but not X) rated movies would be a perfectly fine target for this book.

However, don’t go into it thinking this is your Walt Disney (or even Lewis Carroll’s) Alice in Wonderland… cause it most certainly is not. In some ways, this is actually refreshing and adds some new wrinkles to the tale that would otherwise be lost. In other ways, there’s some creepy stuff going on and I would definitely NOT mind if the author went back and gave us more backstory on the delightfully wicked and depraved Queen of Hearts.