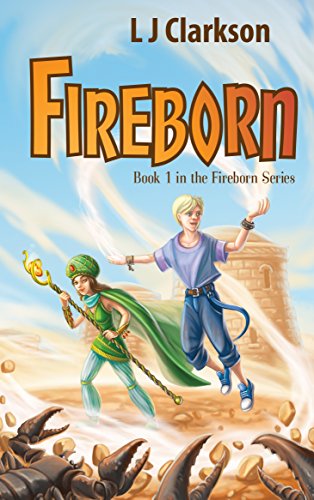 Paranormal buff Andy’s dreams come true when he becomes the newest member of the Guild of Shadows: an organization tasked with protecting the Earth from supernatural threats. In the dusty shelves of the Guild, he discovers a spell to summon a genie. Exactly what he needs to heal his sister from illness. Except Andy summons a rebellious and uncooperative young genie, who refuses his wish. Oh…and his spell also creates holes in the veil, a magical barrier that shields Earth, inviting all sorts of monsters into town. If Andy’s Guild master doesn’t kill him for being so stupid, the evil genie king sure will, along with every last human he plans to enslave in his quest for earthly domination. Can Andy stop squabbling with his genie long enough to team up and send the king packing?

The first thing I enjoyed about this book is the cross-cultural aspect that drew me in off the bat. As an American, I was curious to read a book set in Australia by an Australian author. Even then, the Polish roots of the grandmother added even more of an “Australian-by-way-of-Eastern-Europe” feel that gave the book a unique feel. Some of the Polish history and culture was new for me and I loved how the author incorporated that into the story. Add in the Arabic connection of djinns (genies) and it really felt like a nice mix of various culture’s mythologies that felt natural and not cherry-picked.

The story itself was completely engrossing. Andy was a great pre-teen character who made some stupid mistakes to create issues (even if they were for good reasons) that felt perfectly reasonable if you look at it through the eyes of a pre-teen boy. I loved Jinjiri (the summoned djinn) and her unique staccato way of talking. A lot of times an author will use a “dialect” and it becomes trite after a while. Clarkson’s dialogue for Jinjiri thankfully didn’t feel that way. Andy and his friends have an awesome Goonies/Monster Squad feel and I definitely look forward to seeing where they go next.

The “bumbling adult” character in Andy’s mentor (Gildron) is often one I am not a fan of. I feel like MG/YA books (and TV shows/films) often use that trope to make it seem like all adults are idiots. In this one, I was feeling that way until Clarkson gave the wrinkle about Gildron’s past and *why* he is the way he is now. That little snippet of history ultimately redeemed the trope character and made him way more compelling. This shows how much a little backstory can redeem what otherwise felt like a flat 2d character.

If you skip down to my rating (or see the rating first), you might wonder a bout the 3-star rating for a story I obviously enjoyed. Quite honestly, I would have given it 4-stars but I had to dock a star for editing. Sadly, I found lots of spots throughout the story where words were misspelled in a “spell check won’t find this error” type of way (that/than, he/her/the, etc.). Also, the author wrote narration with sentence fragments a lot. I believe her goal was to capture a more juvenile narration (since Andy is the POV character) but it often made the narration feel more like dialogue . Even so, the story was compelling enough for me to keep reading so I still recommend the book!

Content-wise, this is more than appropriate for a middle grade audience. There are no language or sexual content concerns. There are some scenes of violence and only one in particular that struck me as heavy on the macabre (descriptions of ghuls unearthing corpses in a graveyard to eat) but that was the most “violence” in the book. Dark, sure, but nothing so overtly grotesque as to turn off a young reader.

One note about word choice that I’d wanna point out because, as an American, the word “spook” has a potentially different connotation than in Australia. Andy and his friends are part of the Spook Club, where spook refers to ghosts. In the US, “spook” has two other connotations (1, a spy or 2, a racial slur for African-Americans). Clarkson is using the primary definition so don’t get turned away by the use of the word “spook”. As an Australian, she may not even be aware of the slur definition of the word as it is used in the US sometimes.