Krazy: George Herriman, A Life In Black And White by Michael Tisserand, Books for Boys Review 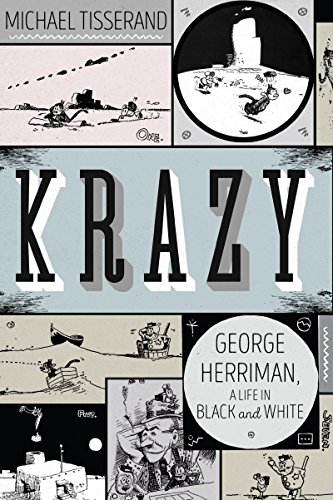 In the tradition of Schulz and Peanuts, an epic and revelatory biography of Krazy Kat creator George Herriman that explores the turbulent time and place from which he emerged—and the deep secret he explored through his art.

The creator of the greatest comic strip in history finally gets his due—in an eye-opening biography that lays bare the truth about his art, his heritage, and his life on America’s color line. A native of nineteenth-century New Orleans, George Herriman came of age as an illustrator, journalist, and cartoonist in the boomtown of Los Angeles and the wild metropolis of New York. Appearing in the biggest newspapers of the early twentieth century—including those owned by William Randolph Hearst—Herriman’s Krazy Kat cartoons quickly propelled him to fame. Although fitfully popular with readers of the period, his work has been widely credited with elevating cartoons from daily amusements to anarchic art.

Herriman used his work to explore the human condition, creating a modernist fantasia that was inspired by the landscapes he discovered in his travels—from chaotic urban life to the Beckett-like desert vistas of the Southwest. Yet underlying his own life—and often emerging from the contours of his very public art—was a very private secret: known as “the Greek” for his swarthy complexion and curly hair, Herriman was actually African American, born to a prominent Creole family that hid its racial identity in the dangerous days of Reconstruction.

Why I Think  Anyone Interested In Cartoons May Enjoy This

Truth is, this book does not really fit into my “Books for Boys” format but it was just so good I wanted to give it some space in review form. So I fixed the section heading above to reflect that. While the book is sold and set up under the premise of exploring George Herriman’s questionable ethnicity (he could *not* have been ‘openly’ black and done what he did with his life in the era he did it) and how it connects to his main legacy’s genderfluidity (I discovered this book via a New Yorker article discussing just that), it is so much more than that. In fact, this book should serve as a primer to the history of cartooning and even the rise of animated cartoons for anyone interested in either.

Even deeper than that, Tisserand dives into American history such as the rise in prominence of New Orleans (where Herriman is originally from), the birth of Los Angeles (and ultimately Hollywood), and the racial barriers in boxing (and ultimate crowning of the first black heavyweight boxer Jack Johnson). While this feels like a grandiose adventure for the biography of a humble cartoonist, Tisserand makes it all fit together seamlessly. Whenever he feels the reader needs more context to understand the gravity of a situation or Herriman’s involvement, he goes just far enough down the “background info” rabbit hole to set the context but pulls the reader back before he or she gets lost on a tangent.

To give an example of just *how* thorough Tisserand is in this biography, the text of the book (hardcover) is 439 pages. His notes, bibliography, and index run from page 447-545. Even more amazingly, there is so much background info surrounding Herriman’s rise to “prominence” that the introduction of Krazy Kat, Herriman’s main legacy, didn’t even come around until halfway through the book, even though there are Krazy comics sprinkled throughout the book (as well as other Herriman works from throughout his career). Another nice element to the writing is that, though it’s obvious Tisserand thinks very highly of Herriman, it falls far short of a hero worship biography. He presents Herriman, to the best of his ability, as his contemporaries saw him (which, at times, was almost hero worship itself).

It’s a biography about a cartoonist. Spoiler: he dies in the end. From a content standpoint, it’s more than appropriate for anyone who would want to learn more about the history of cartooning in America (with some side lessons on racial relations in the early 20th century as well). Tisserand writes matter-of-factly about minstrel shows and blackface and other common vaudeville entertainment in the time period and does a good job of reserving judgement, only discussing it when it is relevant to Herriman himself, who lived as a white man even if he had some black heritage.

As any in depth non-fiction work can be, the language and context is deep and complex, much like Herriman’s work itself. Tisserand does a fantastic job of making century-plus old stories feel accessible to the reader so I would think an interested high schooler would be able to handle this book without much issue.