Natasha Larry resides in Huntsville, Alabama with her daughter and fiancé. She graduated from Tusculum College with a B.A. in History and is currently working on getting her certificate in education. Apart from writing, she is a self-proclaimed comic book nerd and urban fantasy junkie. Her poetry and short fiction has appeared in publications such as Writing Edge magazine and Escaping Elsewhere. Darwin’s Children is her first work of novel length fiction.

I’d like to start this review by extolling the virtues of Netflix in general for having the insight to have such a wide selection of kick-butt old school cartoons. Other than X-Men, my favorite is She-Ra: Princess of Power. Netflix has the discontinued DVD (released in 2006-7) of what is (arguably) the best girl-power cartoon of all time. Well, at least of the 1980’s. 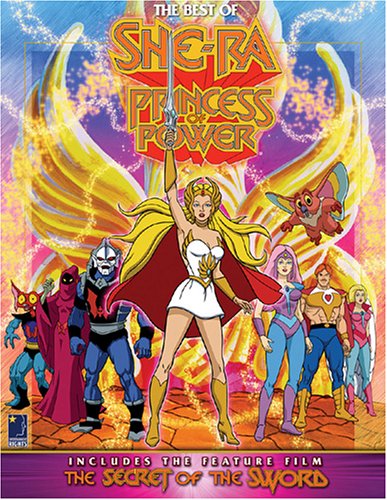 Produced by Filmation in 1985, She-Ra: Princess of Power is a spinoff of the hugely successful cartoon: He-Man and the Masters of the Universe. I’ve always been a huge fan of He-Man, but as a young girl I remember being relieved when the industry wised up and decided to create a character aimed primarily at a young female audience. I mean, He-Man is “fabulous” in his tight little shorts, but nothing beats a Princess that can kick your butt. Not to mention that sword that comes only in one color: bitchin’.

She-Ra is He-Man’s twin sister and makes her debut in He-Man and She-Ra: The Secret of the Sword-a full-length, animated movie. It was basically a compilation of the first five episodes of the then forthcoming series that premiered in 1985. If you don’t already know the She-Ra story, then shame on you. I suppose I can offer a brief overview.

She-Ra (Princess Adora) was kidnapped at birth by the sinister Hordak and taken to Etheria. When she came of age, she served as a Horde Force Captain. It was He-Man that came to rescue her, and she joined the Great Rebellion. It was at this time that she received her Sword of Protection.

The magical energy within this sword is how a princess became a princess of power. With her sword in hand, She-Ra reunites with her parents and returns to Etheria. The show basically revolves around Adora’s adventures with the Great rebellion and their fight against the evil Horde. As much as I love the show, it’s basically the same thing as He-Man-right down to the opening and theme music. Many stars from He-Man, including the infamous and nasty Skeletor, make frequent guest appearances on She-Ra… y’know, because they are the same show… basically.

I remember being a little girl and playing with my She-Ra fortress, allowing that awe-inspiring rush of girl power course through my veins… But, alas, people grow up and the cartoons we love in our childhood fall to the wayside. I had forgotten all about She-Ra until I spied my better half and three year old daughter watching He-Man on Netflix. Immediately I thought to myself, I wonder if they have…

A juvenile smile lit up my face after preforming my search and discovering that all ninety-four episodes were there, waiting for me to reclaim my childhood-and reclaim my childhood I did. I’m far too much of a geek to admit that I got a chill upon watching the opening scene in the first episode of She-Ra-Into Etheria, and hearing the words: 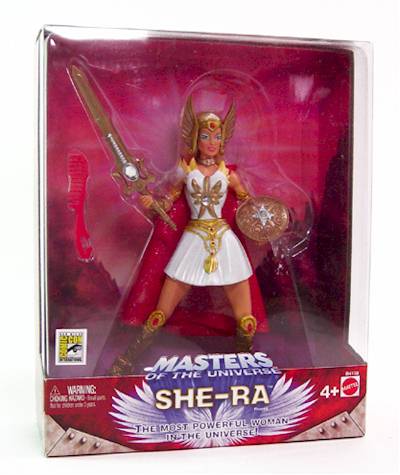 80's cartoons were all about the toys.

Where darkness roams, fights the champion of light. Where hope seems this lost, there rise the rebellion. Together they stand ready against the dark, evil warriors of the Hoarde and their leader: the terrible Hordak. The rebellion: armed with hope and the ancient powers, against the force of an intergalactic army. This is the story of one, who will become the leader of the Great Rebellion. She-Ra: Princess of Power!

I especially love the part where the power sword materializes upside down, and shoots out a force of white light. Ahh, good times…

I actually found myself pumping my fist and proclaiming, “Hell yes!” I mean, sure She-Ra is cheesy as all get out and, really, is just He-Man redone in order to sell toys to young girls in the 80’s (toys I had all of, thank you very much) but re-watching the series is worth it just to feel that nostalgia. It is pretty awesome to sit down with my three year old and see her get excited when She-Ra does her thing, and now, thanks to the magical power of Netflix, I can.