As promised last week, I am going to review a Nickelodeon series this week as part of my Saturday Morning Reviews.  It was a little hard to dig through all of the real life shows that Nick is focusing on that aren’t SpongeBob Squarepants, but I decided to do a show that had me excited when I saw the pre-release commercials this past year.  This week I am reviewing Fanboy & Chum Chum. 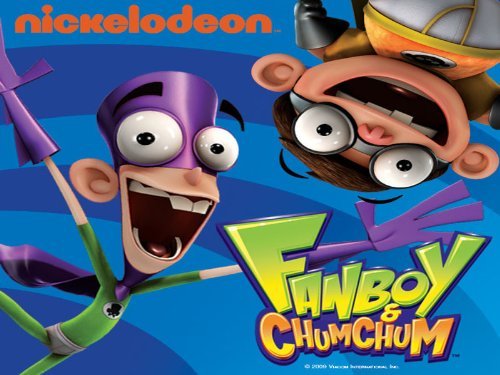 Much like Adventure Time, which I reviewed a few weeks back, Fanboy & Chum Chum is produced by Frederator Studios and was part of the Nicktoons Random! Cartoons series of shorts.  Both were picked up for deals (Adventure Time by Cartoon Network and Fanboy by Nickelodeon). Whereas Adventure Time is a parody of the RPG/adventure genre, Fanboy parodies comic books.

As I like to discuss the voice acting first, I’ll jump in on that front.  There really aren’t any big names that jump out at you except some of the minor characters.  Jamie Kennedy plays their wizard classmate Kyle and Wyatt Cenac (from The Daily Show) voices Lenny, the clerk at the convenience store the two main characters frequent.  Fanboy is voiced by a voice acting newcomer David Hornsby and Chum Chum is voiced by Nika Futterman, who has been around (Handy Manny, Batman: The Brave and the Bold) but is getting her first shot at a lead role.  The cast is decent but not stellar.

The general premise of the show is simple.  Fanboy and Chum Chum are two kids who dress in superhero costumes and do wacky things in their school, their neighborhood, and their home.  They are insanely annoying to their teacher, the clerk at the Frosty Freezey Freeze, and are generally ostracized by all of their other classmates.  There are regular references to comic book and fanboy (duh)  culture, including Oz, who very strongly resembles the famed Comic Book Guy from The Simpsons.

While there have been some fun episodes, such as anything involving Janitor Poopatine (a thinly-veiled parody of Senator Palpatine of Star Wars), most of Fanboy & Chum Chum is a series of unoriginal gags that often ends in toilet humor.  Granted, I’m a fan of toilet humor but sometimes when watching the show, I feel like the writers hit a wall and there’s a guy in the room whose primary suggestion regularly is, “Well, just make him fart.”  Then they all nod and keep going.

This show is the exact opposite of Adventure Time, for me.  I went into Fanboy & Chum Chum expecting happy things.  A comic book world parody was something that seemed original and unique, like shades of Freakazoid revisited.  Unfortunately, there is nothing comic bookie about the main characters and it is more a parody of loser weird kids in elementary school who get shunned and beat up by the stereotypical bully named Boog.  It had potential but, regrettably, there is no reason to actually like Fanboy as a main character and he comes across just as annoying to viewers as he does to everyone inside the world of the show.

2/5 Giant Cartoon Mallets to Fanboy & Chum Chum.  I wish it was better but it just isn’t and it makes me sad.