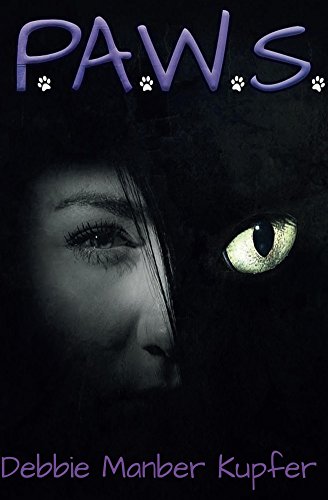 When Miri receives a silver cat charm from her omama, Celia, on the night before Celia dies she has no idea that the charm holds a secret, a powerful magic that saved her omama’s life and is about to make Miri’s a whole lot more interesting.

Join Miri on a mysterious and supernatural journey with her new friends, members of an underground St. Louis society known as the Partnership for Animagi, Werewolves, and Shapeshifters, better known as P.A.W.S.

This is a really enjoyable take on the shapeshifter/animagi/werewolf concept. The collective mythos around shifters of all kinds is always fun to read about. Kupfer does a really fantastic job of capturing the animal essence of each character in their human form to match their various animals (eg, the young Joey from Australia, an animagi kangaroo, is energetic and bouncy). Some of the naming conventions are a little cheesy (the Katz family are cats, the Ryder siblings are horses, the werewolf big bad is Alistaire Wolfe) but it doesn’t take away from the story’s enjoyment at all. Our main characters (Miri, Josh, Danny) are very unique and fleshed out and even our secondary characters (Lilith, Mandy, Miri’s Uncle David) have their own stories and histories and are very three-dimensional. It is clear Kupfer knows a lot about the history of all of her characters and that none of them feel like throw-away placeholders in the story.

The mythos and story itself is very fun. The amalgamation of the various types of shifters into one cohesive world and mythology is unique and the Hogwartz-esqe nature of the schooling and training of the P.A.W.S. kids is a fun way to introduce this world. Also, in a refreshing way, we’ve got a completely unsympathetic bad guy in Alistair. Many stories (books, shows, movies) these days try to give you the tortured soul sympathetic villain and I love that Alistair is much more of the distilled bottle of evil villain. It’s not as common these days to have a big bad really be a nasty piece of work (and it is well-established that Alistair is just that, in some ways… it’s driven home TOO hard [see content area below]).

The amount of history in this book, going back to WWII Europe to modern days, further adds to the magical realism of the story. The author clearly is writing about material that is well-researched, but at the same time she adds her own little flairs and history into the mix to make it her own. I am quite intrigued to read more of the story and answer some of the unpulled threads that were touched upon but not central to this first book. I really enjoyed the story, the writing, and the world.

This is the tricky part with this book. 98% of this book would be more than appropriate for a middle schooler in the 12+ range. About 2/3 of the way through the book, however, Kupfer threw in a chapter that I really wish wasn’t in the book. Surprisingly, none of the other reviews I’ve read seem to mention this. In Chapter 30, our big bad (Alistair) seduces Cynthia (Miri’s aunt). While she doesn’t go into full erotica-level detail, phrases like “he took his time pleasuring her” really felt out of place with the tone of the rest of the book and the age of the intended audience. I am not entirely sure why she felt the need to A) include this chapter at all and B) fail to fade to black on the scene before it got to that level.

I can only assume she meant it as foreshadowing for what Cynthia helps Alistair steal (spoilers as to what it was) and further show how “bad” Alistair is. However, as mentioned above, Alistair had already been well-established as a really nasty big bad so this scene so late in the book was wholly unnecessary. Without this chapter, I’d be able to say there is no sexual content. With this chapter, I bump up my recommendation that this book only be read by high school (15+) or older.

Outside of that, there is some violence and one passing mention of rape (Alistair forced a woman in his control to watch him rape another, but it only mentioned in passing, not described). This, too, felt out of place and unnecessary for the same reason as the scene with Cynthia. We knew Alistair was a terrible creature, it wasn’t necessary to include this to further demonstrate how bad Alistair was. The on-screen violence is marginally descriptive but I’d still consider it in the PG13 range (werewolves bite and scratch, as we all know). There are no concerns with language or vulgarity at all.

While I hate to remove a mallet for a book I’d otherwise give 5 mallets to, Chapter 30 really was offputting and incongruous with the rest of the story and still kinda sits poorly in my stomach compared to the rest of the book so leaves me with 4/5.