Toonopolis is a cartoon city that is home to the thoughts and ideas of all sentient beings in the universe. As the center of the Tooniverse, it acts as an other-worldly rest stop for these creations.Gemini is a teenage human boy who is thrust into Toonopolis through his father's scientific research program. He loses part of himself in the process and immediately begins a quest to regain his lost memories with the help of his Tooniverse guide named Jimbob the Talking Eggplant.After an altercation with a mysterious Shadowy Figure, Gemini's mission is changed, an he begins a new quest to defeat Shadowy Figure and protect Toonopolis from his nefarious destruction. Along the way, he meets new friends, discovers just how diverse and strange Toonopolis is, and learns lessons about compassion, forgiveness, redemption, and being true to oneself. 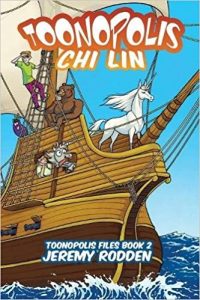