UnCommon Lands presents 20 unique depictions of fantastic places and alien landscapes. These stories of the human (and inhuman) experience transcend time and place and will transport you to worlds you’ve never imagined. Including new and veteran voices, our UnCommon Authors bring you stories which span multiple genres, but hold together on a framework of quality storytelling and a solid theme. UnCommon Lands reminds us that where we are from isn’t as important as where we are going.

Tales From Toonopolis Volume One 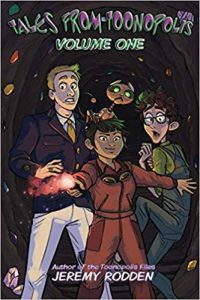 Toonopolis is a cartoon city that is home to the thoughts and ideas of all sentient beings in the universe. As the center of the Tooniverse, it acts as an other-worldly rest stop for these creations.In this collection, you will find short stories and novellas telling side-stories and adventures from minor characters met in the Toonopolis Files novels. From Candemons to antiheroes to demonic toasters to steampunk heroines, there is a wide range of tales within these pages!Delve into the infinite world of Toonopolis and see how diverse and wild the cartoon universe can be. Even if you've never read the Toonopolis Files novels, you can still read and enjoy these stories as your first taste of Toonopolis!