The Ghost in the Crystal (School of the Ages #1) by Matt Posner, Books for Boys Review 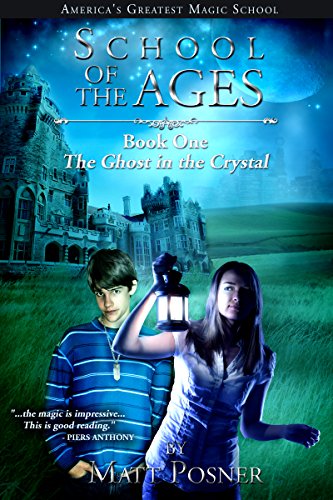 Ghosts, elementals, time travel, magic duels, teen romance, sacrifice, and ultimate loss… Simon, thirteen, is drawn by surprise into America’s greatest magic school: New York City’s School of the Ages. When the evil spirit of a bitter and scheming heretic from ancient Alexandria attacks, he must risk everything in order to save his soul. Kids and adults won’t stop reading — The Ghost in the Crystal.

Let’s just get the obvious comparison to Harry Potter out of the way from the beginning (as even the author draws that comparison). This story is about a school for magic-using kids but in New York City. However, other than that over-arching comparison, the School of the Ages series is hardly a Potter clone with American kids slapped into a magical school instead of British ones. First and foremost, the serious tone of these books is struck early and often and definitely hits home more than the fun and whimsical nature of the early Potter books (sure, Voldemort is scary but he’s just a hypothetical scary for the beginning of the Potter series). All else I’ll say in comparison to Potter is this: if you want to compare them, remember that the first Harry Potter begins when Harry is just turning 11. Simon, our protagonist in this book, is nearly 14 when the series starts. So comparison wise, think about the Potter series beginning at Goblet of Fire and the level of seriousness (and romantic interests) by the time Harry hit that series.

Okay, let’s discuss the uniqueness of the series now that that comparison is out of the way. The part that stood out most for me (and will appeal to anyone who loves learning about other cultures) is how well Posner incorporates Chasidic Judaism as an important part of this world. At the school itself, there are many Jewish kids of varying degrees of commitment to the religion (ranging from ultra-orthodox to simple cultural connections) and Cabala (Jewish Mysticism) is integral to the teachings of the school. The author does a great job using Simon’s experiences to educate the reader on a culture that may be otherwise unfamiliar to most people (myself included). At the same time, it’s not a primer or an attempt to indoctrinate. As someone who loves to learn about other cultures, this well-written exposure to the Chasidic world through Simon’s eyes was enlightening. In one chapter, he handles exposure to a Hindu family ritual with the same level of respect and deft description that is also very cool.

As for the actual plot, the story gets you hooked right away. Starting with a simple premise that gets demonstrated very early–magic is real and is no joke–Ghost in the Crystal hooks you. A young boy reading the book can easily see themselves in Simon’s shoes. Even the realization that his study partner (Goldberry) is a girl sets Simon down the “omg, it’s a girl and I wonder if we’ll like each other” line of thought that would be very logical for any 13 year old boy to experience upon finding out that someone he has to spend a lot of time with in the coming months is a girl. Simon felt very real to me. Very believable as a 13 year old boy and not just an older writer’s version of what they think a 13 year old would be.

As I said before, this book gets serious very early on. It is made quite clear to the reader, through Simon, that there are real consequences for magic and real issues to be dealt with. Sure, there are still humorous moments in the book and the entertaining sidekick (Simon’s roommate Robbie), but in his first real magical interaction (with his study partner’s father), Simon enters a magically binding agreement to exchange favors.

What is also great is that the teachers and faculty of the school hold the children to adult-like levels of responsibility, even to the degree that the kids are allowed to battle each other and even cause harm (unless one person submits). This leads to some bloody situations and adult-level conflicts (even if they are just teenagers). There is no major violence or gore or anything, though, so it’s still more than age-appropriate for the middle grade and up crowd.

There are no language or sexual content concerns in this first book to make parents or educators shy away either. But, as I said, this book, even as the first in a series, makes sure the reader knows that magic is no joke and everything will not simply be solved with a magical wave of the wand by the end of it. The gravitas of the first book in the series is somewhat refreshing for a YA fantasy and adds to the realism of the story that really drives home the urban fantasy aspect (this could be real and take place in New York City to this day).